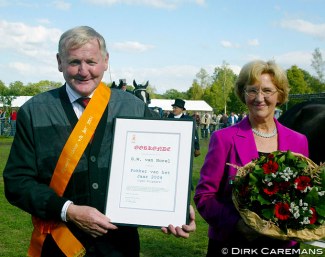 Van Norel was the founder of De Pretendenthoeve in  Wapenveld, The Netherlands, which he founded in 1969.

From the start Gert Willem focused on the breeding of dressage horses and his impact on Dutch warmblood breeding cannot be denied.

"It was remarkable that at that time he had his stallions compete at high level, especially by (Dutch Olympian) Annemarie Sanders-Keijzer," Horses.nl posted. Van Norel later partnered with Christa Larmoyeur and Sjaak Laarakkers for the training and competing of his stallions.

In 2004 Van Norel was named KWPN Breeder of the Year and in 2015 he was named Officer in the Order of Oranje-Nassau for his life-time achievements in horse breeding.

Gert Willem leaves behind his wife of 51 years, Roelie Fikse, and his four children André, Martin, Evelien and Wichert and nine grandchildren.