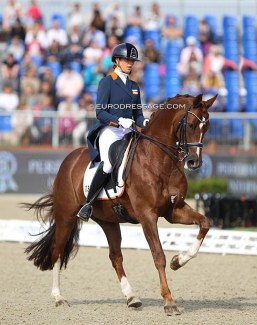 After four years working for Dutch team trainer Alex van Silfhout and his son Diederik, Dutch Under 25 team rider Febe van Zwambagt has decided to leave and start her own business.

The 23-year old Van Zwambagt began her own company five years ago. In 2017 she briefly worked as an assistant trainer at the German stallion station Ferienhof Stucker in Germany, before changing job and joining stable Van Silfhout in Lunteren, The Netherlands.

During her time at Van Silfhout's she got the ride on Grand Prix horses Fyeo (by United x Jazz) and Edson (by Winningmood x Oscar). With the latter horse she competed on the Dutch team at the 2020 and 2021 European Under 25 Championships.

"It has always been my goal and ambition to run my own company," Van Zwambagt told De Hoefslag. "I was already doing that, but now I want to fully commit to it." Febe does not yet have her own stable and is looking for boxes to rent. "The idea of having more freedom fits my character. I want to do my own thing."

Febe is grateful for her time at Van Silfhout "I learned a tremendous lot and they have brought me to the top of international U25 sport. Thanks to them I got on a higher step of the podium."