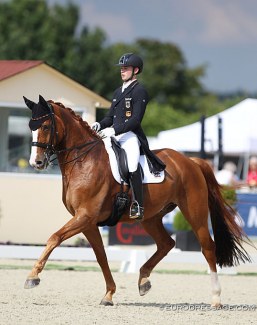 Lacoste, the double team gold medal winning ride of German Under 25 champion Raphael Netz, has sold as a schoolmaster to German based Norwegian Celina Bådstangen.

Lacoste is a 13-year old Hanoverian gelding by Locksley II out of Wilma (by Wolkenstein II x Wanderer x Goldstein). He is bred by Friedrich-Wilhelm Postel and a full brother to Jean Philippe Siat's Lovesong.

The chestnut gelding sold as a youngster to Jessica and Benjamin Werndl's business in Aubenhausen.

He was first competed in 2014 under Lisa Mayer, in 2015 briefly by Julia before the Werndl's assistant rider Julia Hamberger began swhoing the horse in the autumn of 2015. She rode him through 2016.

Five years ago, in 2017, junior rider Raphael Netz was allocated Lacoste and first showed him at S-level in Munich in February of that year.

One month later the pair made its international Young Rider debut at the CDI Caselle di Sommacampagna in Italy, followed by a summer start and double win in Lamprechtshausen. In 2018 they showed at the CDI Lier.

Netz and Lacoste found their groove in 2019 in the Under 25 division and were selected on the German team for the European Under 25 Championships in San Giovanni in Marignona (ITA), where they scored team gold and placed 8th in the Short Grand Prix.

In 2020 they got reselected on the team after the selection trial in Hagen and reclaimed team gold at the 2020 European U25 Championships in Pilisjaszfalu, but added short grand prix bronze to it and placed 8th in the Kur.

This year Netz rode Lacoste in the U25 tour at the CDI Mannheim, but was selected on the German team with his new ride, Akane Kuroki's Elastico. Raphael's last competition start on the Hanoverian was in the senior tour at the CDI Ludwigsburg, where they were 7th in the Grand Prix with 70.978% and second in the Kur with 77.360%

Lacoste has now been sold to Celina Bådstangen as a Grand Prix schoolmaster.

"For five years we were a team and together we went through everything, from junior M-level to Grand Prix," said Netz. "He thought me so much and was my biggest schoolmaster. I'm very grateful for our beautiful time together, words can't describe."

Lacoste will remain based at Aubenhausen, where the Norwegian Bådstangen is training. Celina has been competing her 12-year old Westfalian Arezzo (by Arpeggio x Gracieux x Salut) in Germany and Austria since 2019.