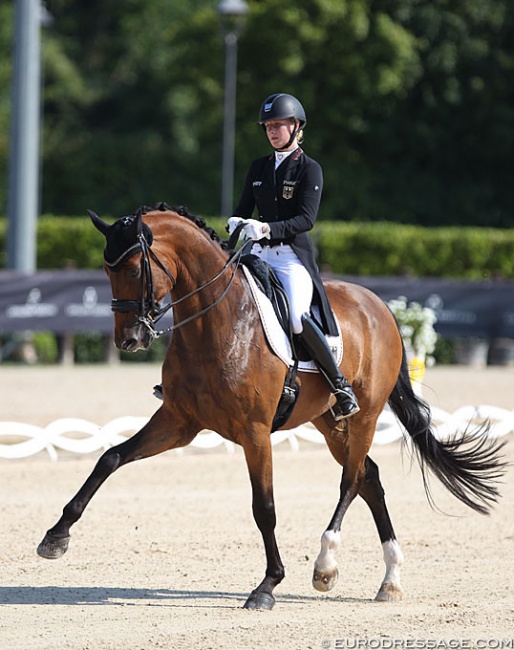 Both horses are owned by Michele Widner del Pino.

The bay gelding was then brought to Germany where he landed in Bianca Nowag's stable. She made her Under 25 Grand Prix debut with him in 2019 at the CDI Nieuw en St. Joosland. The pair produced consistent 69-70% scores and was nominated on the German team for the 2019 European Under 25 Championships in San Giovanni in Marignano (ITA), where they won team gold and kur silver. Nowag and Sir Hohenstein concluded their stellar year on a high note by winning the 2019 Piaff Forderpreis finals in Stuttgart.  In 2020 Nowag made her international senior Grand Prix debut on Sir Hohenstein at the CDI Oldenburg, where they posted 70.353%.

The 6-year old Hanoverian bred Fassianos (by For Romance I x St. Moritz) is a former licensed stallion who became premium at the 2017 Hanoverian Stallion Licensing.  After one season standing at stud, the dark bay has been gelded to be focused on sport. He has been carefully trained and lightly competed by Bianca Nowag from 2019 through July 2021.

Sir Hohenstein and Fassianos have both been relocated to Denmark and are now in full training with Daniel Bachmann Andersen.

"They are doing really good. I am still getting to know them," Bachmann told Eurodressage. "With a few months more training I think Sir Hohenstein would be ready for a show. Fassianos is extremely talented, and I am waiting with him till next year to compete."