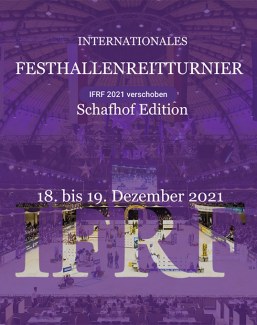 The 2021 CDI Frankfurt has been cancelled as new corona measures have made the hosting of a big indoor event unviable. The Piaff Forderpreis, Nurnberger Burgpokal and Louisdor Cup Finals will move to Schafhof.

"In the past few weeks we have really worked at full throttle and with great euphoria for the Festhalle horse show," said show director Matthias Alexander Rath. “But the pandemic is actually throwing a spanner in the works again. A good three weeks ago, when we had the opening press conference for Frankfurt, I would not have thought it possible that the situation would worsen again."

"Like last year, we will hold the finals at the Schafhof," said Rath. "It's not a Festival Hall Horse Show (like Frankfurt), but we are very happy that we can give riders, trainers, horse owners and, last but not least, the horses the opportunity to compete on a somewhat smaller stage, but still be able to compete in their finals."

All tickets already purchased for the 2021 edition of the CDI Frankfurt will remain valid for the next edition in the coming year 2022.