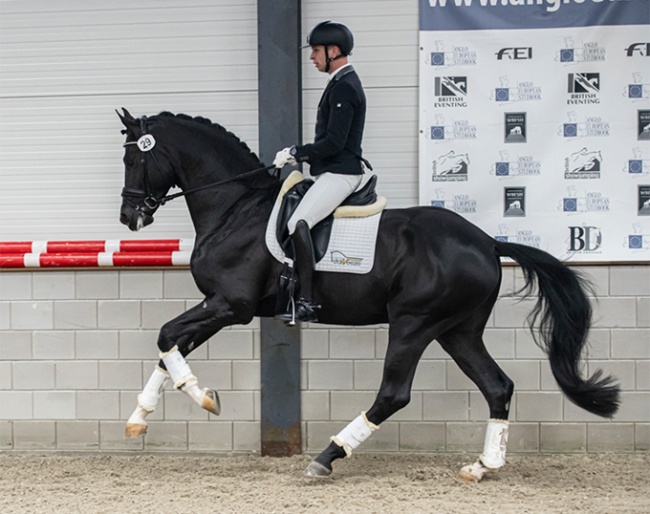 Supreme is a 5-year old Westfalian stallion by Sezuan out of Deja Vu (by De Niro x Sandro Hit). He is bred by Ralf Knauf in Germany.

Supreme is bred out of the same dam that produced the popular breeding stallion Total McLaren.

He was owned and trained as a youngster by Bart Veeze, who rode him in the Subli Cup young horse qualifiers this year. The pair will be competing at the finals held during the 2022 CDI-W Amsterdam as their final show together.

The 5-year old only recently got AES Approved at the licensing on 27 November 2021 in Schijndel.

American para dressage Kate Shoemaker, who finished fourth at the 2021 Tokyo Paralympics on the 14-year old Hanoverian Solitaer (by Sandro Hit x De Niro), acquired Supreme as a new iron in the fire.

"This year started with a casual search for a horse able to fill Soli’s shoes in the future," Kate told Eurodressage. "While a 5 year old was definitely not the intended plan, it was love at first sight when I saw a short clip of Supreme.

Shoemaker rides at Grade IV level due to white matter lesions from periventricular ischemia causing motor control dysfunction, muscle weakness, and spasms on the right side of her body. She compensates for the loss of three planes of motion control in her ankle with an ankle foot orthosis (brace) and uses special rein stops for added rein control.

"My first ride wasn’t a match made in heaven as Supreme had to process why my right leg sits differently on his side," she admitted. "The right lead canter would just go faster and faster while he worked out what I was saying. Testament to his lovely temperament, he never made me feel unsafe. By the second ride, our communication was already much clearer. I was most pleased by how he was still very willing to be expressive in his canter even with the limited range of motion in my hips and pelvis to follow the gait."

Shoemaker is excited that Supreme recently was licensed with the smaller Anglo European studbook.

"Stallion approvals in the US can be long process with lots of travel for the horses," she said. "While sport will be the primary focus, it will be nice to have a breeding option down the road and bring another stallion option to US breeders."

Shoemaker hopes that Veeze can qualify Supreme for the 2022 World Young Horse Championships for the U.S.A. before he would become her 2024 Paris hopeful.

"It would be quite an experience if he could try to qualify Supreme to represent the US at the World Breeding Championships next year. I’m thankful that USEF has an option for European based horses to qualify."