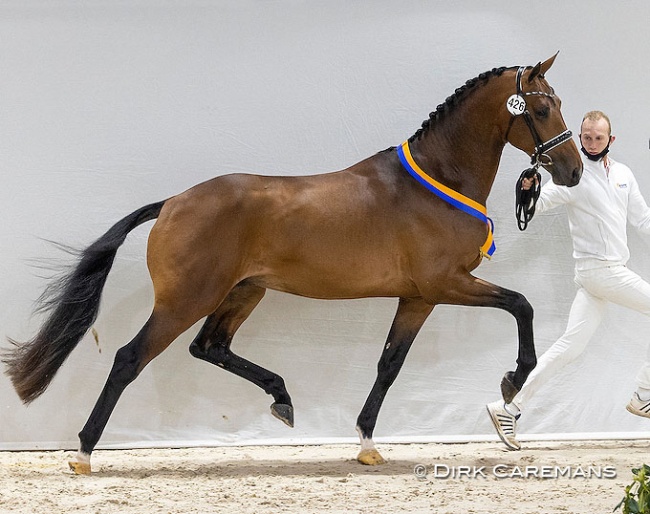 Forty-four dressage bred colts were licensed at the 2021 KWPN Stallion Licensing in Ermelo, The Netherlands, which concluded on Friday 5 February 2021.

Five colts were named premium. Since 2020 the KWPN no longer proclaims a licensing champion.

From Den Bosch to Ermelo

The 2021 edition of the Dutch warmblood stallion licensing took place in Ermelo instead of 's Hertogenbosch due to corona restrictions and was closed to the public. A big show was set up and streamed live with recorded stallion presentations, awards, and live talk shows in between breaks of the licensing.

Eighty-eight colts were selected for the second phase of the licensing at the pre-selection days in December. Exactly half of that group was licensed and will now have to do the mandatory stallion performance test in order to be accepted for breeding for the KWPN society.

While on the first day of dressage licensing (Thursday 4 February), many of the colts were short coupled and short necked, yet expansive leg movers, the second day (Friday 5 February) offered a group of colts more rectangularly modelled colts. Yesterday the Painted Blacks stood out and all four of them were approved, today the Franklins underwhelmed in canter and walk, but Geniaal stood out with three nicely modelled sons, two of them were accepted.  Just Wimphof presented the largest collection of colts for licensing; four out of a group of 9 were licensed.

Furthermore, Van den Sande's sire For Ferrero presented his first crop at this licensing. Out of just 29 colts born in 2018, three of them became licensed stallions.

On Thursday the committee named four stallions premium, today they added just one more to the group, the Geniaal x Hotline.

The complete list of colts that passed at the 2021 KWPN Stallion Licensing are:

While German studbooks were able to boast half a million euro prices for their top selling stallions at auction this year, the KWPN society was unable to convince enough stallion owners to put their colts up for auction through its official KWPN Select Sale.

Only 12 colts were offered for sale in the hybrid auction and just two of them were actually licensed. Ten stranded in the second phase.

The best seller was the licensed Nicky L (by Just Wimphof x Ferro x Abgar xx). He sold for 56,000 euro to a Dutch bidder.

The second most expensive horse was the licensed Norton Sollenburg (by Electron x Charmeur) who found a new owner for 40,000. The same price was paid for the non-licensed Notilas (by Totilas x Don Schufro). Both will stay in Holland.

Most stallions sold privately before, during or right after the licensing. The licensed Nixon (by Totilas x Jazz), who is bred and owned by Sjef Janssen and De Beukenvallei), sold to Blue Hors Stud in partnership with Joop van Uytert.