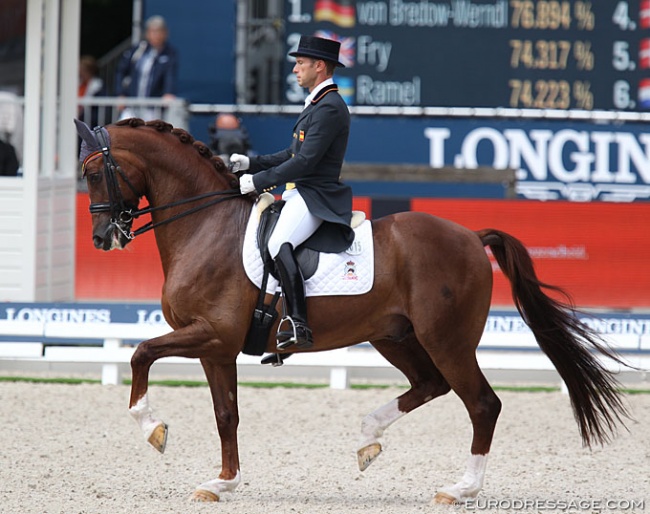 Ein Traum, an internationally competed Grand Prix horse shown by Spaniard Borja Carrascosa and German U25 rider Paulina Holzknecht, has passed away. The chestnut did not survive a week long battle against colic.

Ein Traum was a 13-year old Westfalian gelding by Estobar out of Floriana II (by Florestan x Weinberg x Damokles). He was bred by Norbert Borgmann.

In the spring of 2013 dressage lovers Petra and Dieter Hofmann were in search of a top quality young dressage horse and found their treasure at the 2013 Hof Borgmann Auction. They purchased the talented young gelding at the auction for 58,000 euro and put him in training with Stefanie Kerner.

Kerner made her show debut on Ein Traum in March 2014 and in the next two years competed in several Bundeschampionate qualifiers and regional shows. In 2016 Sina Leuthausser took over the ride and showed him at M-level up to Prix St Georges until May 2017.

To produce and compete the horse at FEI level, the Hoffmans went to German based Spaniard Borja Carrascosa, who made a winning show debut at Grand Prix level with the 8-year old at the 2017 CDN Ankum in Germany on 13 - 14 October 2017.

They did their first international show in March 2018 in Wiener Neustadt where they finished second in the Grand Prix with 70.261% and third in the Special with 72.277%. That year they competed in Mannheim, Compiegne, Fritzens and Aachen in pursuit of a Spanish team spot for the 2018 World Equestrian Games in Tryon. They did not make the team, but the Spanish equestrian federation also refrained from naming a reserve.

In 2019 Carrascosa and Ein Traum had their year with successful starts in Le Mans, Hagen, Wiesbaden and Aachen and winning the Kur to Music at the CDI Doha in Qatar. They were selected on the Spanish team for the European Dressage Championships in Rotterdam, where they were 34th in the Grand prix with 69.705%.

Internationally the pair rode in one CDI in May 2021 in Grote Brogel, Belgium, where they had three top 3 placings.

Unfortunately the rising 13-year old gelding was struck by a severe bout of colic at the end of last week and immediately taken to the equine clinic, where he was operated on. Two days later he underwent a second surgery. Despite a brave battle, he did not make it and passed away on Sunday 13 February 2022.

"He died in my arms and took my tears and my heart," a devastated Petra Hoffman told Eurodressage. "I am so peaceful and proud of him. He was so special till the end."

Hoffman barely left Ein Traum's side in his struggle for life at the clinic the entire week. "My heart is broken more than words can say, every single day was a dream with him."