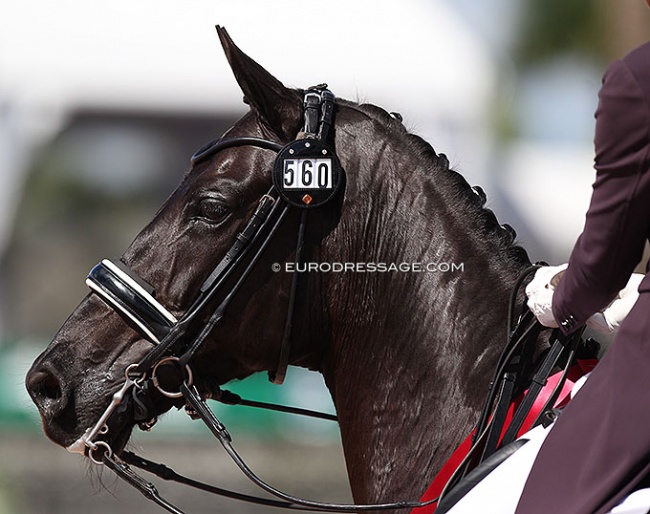 Three weeks ago the 2022 Palm Beach Derby took place at the Global Dressage Festival in Wellington. Eurodressage was on the scene and photographed all CDI competitors. Here is a photo report of combinations, horses, people, animals and happenings that caught my eye.

Since 2014 I have been attending the Global Dressage Festival, though my first Derby was in 2000 hosted McPhail's Equestrian Estates. Over the years I have learnt that most of the American and Canadian riders save their (to-me-more interesting) younger horses for the Derby instead of ride them in the 5* the week before, so it is worth extending a trip to Florida by one week.

Year after year the 5* has underwhelmed me because of the absence of a lot of top U.S. dressage pairs, who save their horses for shows in March. Also this year it were the same familiar faces, although Adrienne Lyle's return on Salvino was definitely the cherry on the cake. To me the Derby week is more fun and inspiring to watch.

International dressage competition in Wellington always feels as if you are in a parallel universe. Nowhere in the world do you feel more that equestrian sport is so money driven as there. The grandeur and wealth of this horse town are incomparable. The VIP tent is such a fun place to hang out, you can network, chat with friends, watch dressage, and nibble on food all day (although for a foodie it is interesting to note that the quality of the food is superior at the show jumping grounds even though dressage VIPers still pay around 45,000 USD (top tier table + class sponsorship) for a season table at Global). When wealthy riders complain how expensive it is to compete in Wellington, it must mean something.

For the cynical Euro-mind it can be a lot to cope with and after two weeks of Wellington, one craves a dose of realism as if desperate for a shot of espresso in the morning to wake up. With war in the Ukraine raging and 2.5 million Ukrainian refugees flooding into Eastern Europe, Welly Word feels "surreal..but nice."

Surprisingly, for the past six years nothing seems to have changed to the show grounds. Don't fix what is not broken or a lack of interest in dressage from main mogul Mark Bellissimo? You still get blistered by the sun when you walk over the unappealing concrete floored trade fair, the VIP area is still made up of white temporary tents instead of promised permanent buildings, the spectator stands have gone from green to blue seats, and the fake ivy decoration on the sides has bleached from green to silver. The stabling area remains unaltered and there is still a lack of space for trailers. I heard people complain that the sprinklers continue to go off when horses are in the arena. Oh well...

Despite all that it's still so much fun to be in Wellington. Even though the 2022 circuit has not yet come to an end, I'm already planning my return next year in February. That dose of sunshine and balmy temperatures are so nourishing for the heart and soul and I needed it more than ever this year. I treasure the tight-knit friendships there, united by a shared loved for horses and dressage.

From a European perspective, the 2022 Palm Beach Derby was a must-see show because of the debut of brand new pair Katherine Bateson-Chandler and Haute Couture (by Connaisseur x Krack C).

Last September the KWPN mare was member of the Dutch team at the European Championships in Hagen under Dinja van Liere and she sold to sponsor Jennifer Huber as a U.S. team hopeful for the 2022 World Championships in Herning.  I immediately had to think back to 2010 when Bateson's sponsor Jane Clark bought Jeannette Haazen's Grand Prix horse Nartan. Then Bateson stayed more than two months in Belgium to train closely together with Haazen, compete Nartan at a national show in Holland first, and get to learn the buttons on the horse, before qualifying on the American team and riding at the 2010 World Equestrian Games in Lexington, KY.

Haute Couture  was flown straight to Florida after purchase in December. Less than two months into their partnership, Bateson made her debut on the hot mare, but their start appeared too premature for the new combination. Not her usual coach Carl Hester was on the scene  to help Katherine, but she was trained by Ashley Holzer. The young Grand Prix mare was very tense in the arena and although Katherine did her best to steer her through the ring as calm as collected as possible, there were just too many mistakes. Pity as there is plenty of talent and quality for the future. It proves once more how hard dressage is!

Haute Couture was not the only high quality dressage horse to be seen in the Global stadium. There were plenty of really interesting horses to watch.

In Bellena (by Belissimo M x Welser) Jan Ebeling probably presented the best horse he's had since his 2012 London Olympic ride Rafalca. I was quite impressed by the lovely presentation of Canadian Ariana Chia on Fiderflame (by Fidertanz x Abanos). The soft connection with the bridle and outstanding tempi changes were a highlight.

At the beginning of the Wellington season Spanish Paula Matute celebrated her first international double victory on Delagronge (by De Niro x Delphi), so I was excited to see what she was bringing to the table, but at the Derby her 14-year old gelding was doing his 10th (!) international Grand Prix class in less than two months and the horse looked tired. The pitfall of success? Hopefully the horse can get a good rest and pick up the thread again.

Two years ago Katie Duerrhammer (then Johnson) impressed me on a beautiful horse named Quartett. This year she rode the equally stunning Paxton (by Dante Weltino x Don Marco). Although he was consistently behind the vertical, the pair is definitely one to keep an eye on as the 11-year old gelding has more to offer in the future.

It's incredible to see Alice Tarjan produce Grand Prix horse after Grand Prix horse, all from novice level. She rode three (!) the two weeks I was in Wellington - Donatella M (by Furstenball x Jazztime), Serenade MF (by Sir Donnerhall x Don Principe) and Jane (by Desperado x ) - and last year she campaigned Candescent (by Christ x Falkenstern II) in Aachen, but this horse hasn't resurfaced since then. I saw Donatella and Serenade compete, both very talented mares, long-legged, refined looking and with incredible freedom in the shoulder. Only the hindlegs need to be allowed to come under more so it generated more efficient back usage. They are cool horses.

One of the most captivating classes was the 1* Prix St Georges which had lots of nice horses in it. Was pleasantly surprised by Tiffany Silverman on the lovely 10-year old Westfalian gelding Vincenzo (by Vitalis x Ehrentusch) ridden in a snaffle. Naima Moreira Laliberte has a spitting image of Statesman in her KWPN gelding Inspire (by Vitalis x Johnson). Supremont (by San Amour x Carry Gold), Stormy River (by San Amour x Weltmeyer), and Astro (by Astrix x Desperados) all showed promise. It was fun to finally see Shannon Dueck's Angelika (by Franziskus), who is out of her 2010 WEG team hopeful Ayscha.

If you spend ten days at a horse show ground, you are guaranteed to see a plethora of weird trends that boggle the mind.

Unfortunately I witnessed a great number of ill fitting bits and nosebands and horses uncomfortable in the bridle because of excessive padding of the noseband. Less is more!

My brain is still trying to wrap itself around the latest fashion trend of "overbandaging" a horse. The front legs are now being wrapped from above the knee and over the hoof as if the horse is wearing transportation boots! This "hyperwrapping" can often be seen in sales videos, with riders deliberately faking more length in the front leg. Remember the day that bell boots were the latest dressage fad?! This phase has disappeared.

The weirdest thing I saw was a mesh round the hind legs of a hunter. It actually reminded me of a wine cooler wrap.

One never ceases to learn!