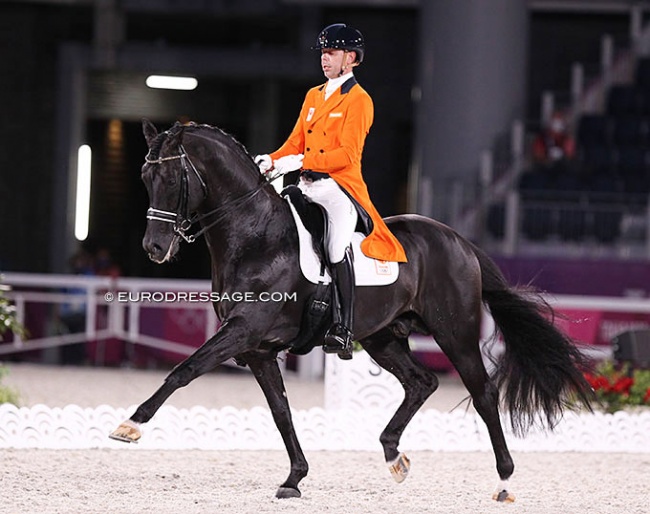 Hans Peter Minderhoud will not be competing his number one Grand Prix horse, Dream Boy, at the 2022 Dutch Dressage Championships this weekend.

Dream Boy, who most recently competed on the Dutch team at the 2021 Olympics and European Championships, is not fit to compete.

"That's really a pity," Hans Peter announced on social media. "He was in such good shape and I was looking forward to this event with Dreamy. I really hope that he'll get well soon."

The 2022 Dutch Championship is the first mandatory Dutch team selection trial for the 2022 World Championships Dressage in Herning this summer.

The 14-year old KWPN licensed stallion (by Vivaldi x Ferro) last showed at the 2022 CDI Doha in February, where he twice placed third.

Although not officially included on the starters' list for the big tour, Horses.nl reported that Hans Peter Minderhoud will be riding his 9-year old young Grand Prix horse Invictus (by Jack Sparrow x Voice) in the big tour.

Minderhoud and Invictus were the 2020 Dutch Small Tour Champions. The gelding made his national Grand Prix debut last weekend in Exloo, where he scored 68.732% and 70.580%.

For Dutch team trainer Alex van Silfhout the team selection for Herning might turn out a challenge with his number one, Edward Gal, taking a sabbatical and his number two, Hans Peter Minderhoud, on unsure grounds with Dream Boy. Dinja van Liere (Hermes) and Emmelie Scholtens (Indian Rock or Desperado) are expected to be the new torch bearers from Team NL.