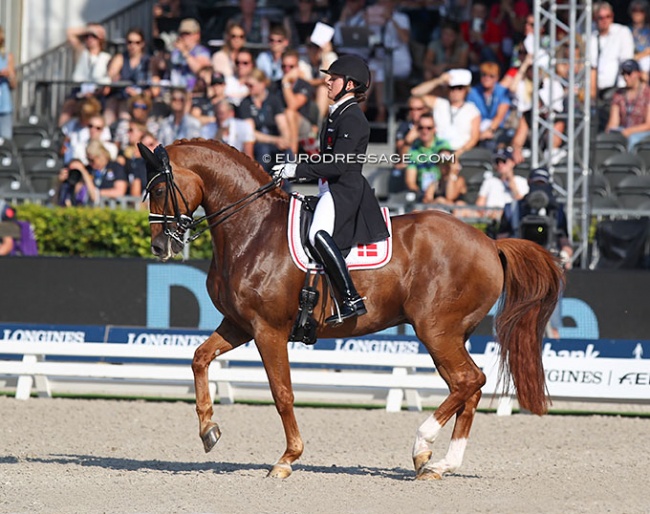 Cathrine Dufour will be officially retiring her career making horse Atterupgaards Cassidy from competition sport in a special ceremony during the 2022 World Championships in Herning.

Atterupgaards Cassidy is a 19-year old Danish warmblood gelding by Caprimond out of Doreen (by Donnerhall). He is bred by Kristine and Michael Sinding at Stable Atterupgaard.

In the spring of 2010, the Dufour family bought Cassidy from owner Brian Christensen as her new junior rider's horse.

Trained by Rune Willum, the pair immediately qualified for the 2010 European Junior Riders Championships, where they won silver in the Kur finals.

Cassidy had already achieved his mission as a youth riders horse for Cathrine and it was not immediately expected for him to become a top Grand Prix horse. In 2014 they made the transition to Under 25 but took their time and only once showed in a CDI that year. In 2015 they gained more U25 mileage and by the end of the year moved into the senior ranks.

Cassidy fulfilled Dufour's dream and took her to the Olympics: Rio in 2016, where they were 13th in the Kur finals. He upped the ante and at the 2017 European Championships in Gothenburg put her on the podium for team silver and double bronze.

In 2018 the pair missed out on the World Equestrian Games in Tryon due to an injury, but they returned in 2019 coached by Nathalie zu Sayn-Wittgenstein and Kyra Kyrklund. At the 2019 European Championships in Rotterdam they got another, Grand Prix Special bronze.

Cassidy showed only once internationally in 2020 and once in 2021 at the CDI in Herning in October, where they won the short Grand Prix. It was his last competition in his career.

Dufour will celebrate Cassidy's retirement from sport in Herning.

"It's going to be very emotional for me, and I cannot quite understand that it will be my last ride with Cassidy in front of an enthusiastic audience - which he loves. I hope he gets the farewell he very much deserves," said Cathrine.

The farewell will take place on Monday 8 August after the Grand Prix Special medal ceremony of the 2022 World Championships.