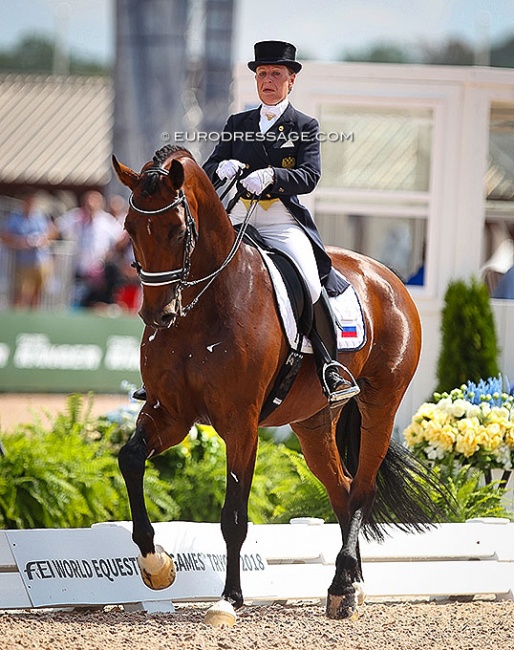 The internationally competed Grand Prix horse Fuhur has found a new rider in Germany. He has joined the ranks of German Young Riders' champion Luca Collin, who is preparing for her Under 25 transition.

Fuhur is a 13-year old Russian warmblood by Furstenreich out of Vanessa (by Nagnat). He is bred at Olymp Kubani, a Russian Warmblood-Trakehner stud farm in the Krasnodar region in Russia.

The bay gelding was trained and competed up to Grand Prix level by the Austrian based Russian Elena Sidneva.

His CDI show debut was in April 2017 at small tour level at the CDI Wiener Neustadt. In 2018 he moved up to Grand Prix and competed for Russia at the 2018 World Equestrian Games in Tryon, where they scored 64.953% in the Grand Prix.

The pair became the revelation of the 2019 European Dressage Championships in Rotterdam, where they scored 72.950% in the grand prix and 72.568% in the Special.  The bay gelding showed the most classically correct piaffe-passage in the right frame: poll highest point, nose out, lightness and harmony.

She made her national show debut in February 2020 and scored 74ù. At their international debut at the CDI Lillestrom a week later, they posted 71.587%. In March she competed him in the Grand Prix class at the CDI Herning and got 72.087. Anna's trainer Andreas Helgstrand took over the ride in the autumn and competed the horse at the CDI Aarhus in October 2020, scoring 70.787% in the Grand Prix and 74.78% in the Special.

Almost a year later and after a baby break, Anna returned to the arena with Fuhur at the CDI Herzlake in July 2021 and got 71.326% in the Grand Prix. In February 2022 Fuhur was shipped to Patrik Kittel for training and a potential sale. Kittel competed him in one CDI, Opglabbeek, where he got 74.717% in the Grand Prix. They was entered for the CDI Hagen but Fuhur did not show there. Kittel and Fuhur did win the 2022 Swedish Grand Prix Championships in the summer.

Fuhur has now joined the ranks of German young rider Luca Collin, who is based at Gestüt am Wiesengrund in Velbert.

She trains with Jochen Bender and Isabell Werth and already purchased Dong Seon Kim's Bonamour (by Bonifatius x Rousseau) in Kittel's barn in July 2021 as an U25 hopeful. The pair has not yet competed.

Last weekend, Collin won the German Young Riders Champion's title in Verden on her number one in the barn, Descolari. This is her third consecutive title.