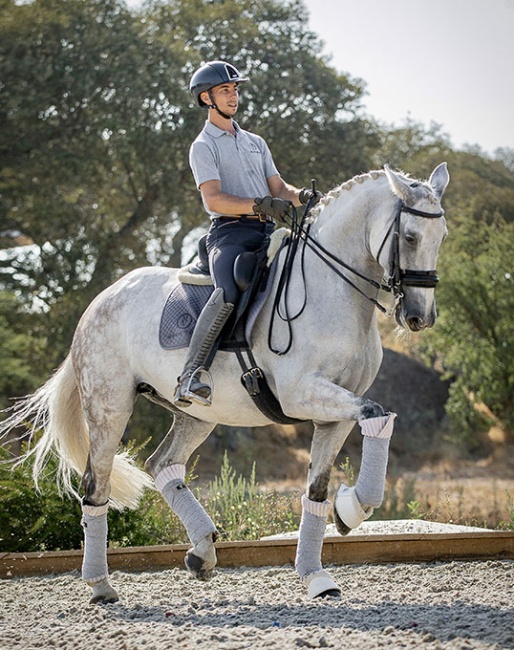 The goal is for Joao Torrao to develop her to Grand Prix level with the 2024 Paris Olympic Games as ultimate dream.

Lufada MVL is a prime example of the wonderful breeding programme run at Monte Velho Equo-Resort in Arraiolos, Portugal.

The grey mare is by Franquelim MVL, a half-brother of Equador MVL who is currently in training in Brasil, and out of Chiquinha MVL (by Quixote), the foundation brood mare and pillar of Monte Velho 's breeding program. She is a half sister to the late international Grand Prix horse Batuta

Lufada MVL has sold to Lindstedt, but Joao Torrao will retain the ride. He has trained her from the very beginning.

“I’m very happy and excited for the possibility to join this journey with the highly talented mare Lufada MVL together with the whole Monte Velho Team and João Torrão," said Lindstedt who is the founder of the Swedish home concept store Hemfrid.

Diogo Lima Mayer, managing director of Monte Velho Equo-Resort, explained, "Lufada is for sure the most powerful mare we have ever bred at Monte Velho. She has three very good gaits and offers a very complete package. She represents the modern type of Lusitano horse we're trying to breed, with more carrying power in a more athletic conformation. Being a niece of Equador, not only has she inherited the same kind of engine behind, but is also endowed with the impulsion that comes from grand sire Quixote."

Lima Mayer added that Lufada, "has been very consistent from the beginning of her training, winning all her FEI young classes in Portugal, with several scores above 80%. We’re also thrilled to show Lufada’s son, the 3-year old stallion Pagode MVL (by Guardião do Penedo) next year and we’re expecting two foals from her in 2023."

Diogo is thrilled to have welcomed Monica as a new partner to their competition programme. The joint venture enables these dressage loving people to dream again of the Olympics.

"It is a great pleasure and with much enthusiasm that we have welcomed Monica onboard of our team," said Diogo. "She spotted this mare's great talent and brings her vast equestrian experience to our project, which will boost Portuguese dressage sport. The mare is making her debut this year at FEI 7-year old level, and we plan to introduce her to the Medium and Big Tour in 2023. We are very happy with her development and her ability for collection, so another exciting journey lies ahead of us. It's an honour to work with Monica in this exciting project, and our team is really committed to enhance this mare's incredible potential."

Joao and Lufada MVL are enrolled in the High Performance Program of the Portuguese Equestrian Federation led by team trainer Kyra Kyrklund.