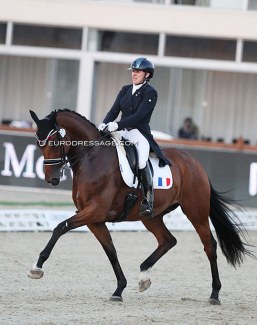 Austria is setting itself up for the 2022 show year with two new U25 combinations. After Franziska Fries' Atomic was allocated to Florian Artner, the 19-year old Fiona Spranz got the ride on French U25 horse Santiago.

Santiago is a 10-year old NRPS registered gelding by Spielberg out of Nimmerlai (by Houston x Naturel x Nurprimus). He is bred by M. van de Biggelaar.

The bay gelding was originally owned by Julie van Eeuwen before he sold to Bravard in France in 2017.

Under French Alix Bravard, Santiago made his international show debut at Under 25 level at the CDI Le Mans in February 2020. They were French Under 25 Champions that year, but did not compete at the 2020 European Under 25 Championships in Budapest.

Spranz made her international show debut this year as a young rider aboard the 15-year old Dutch mare Boolya PB (by Krack C x Jazz), whom she has been riding since 2019. Previously shown by Japanese Yoshie Ota, the chestnut Boolya PB gave Spranz CDI ring experience in Samorin and Achleiten.

Spranz wants to continue riding Boolya PB in the young riders' tour, while Santiago can give her her first U25 Grand Prix experience.