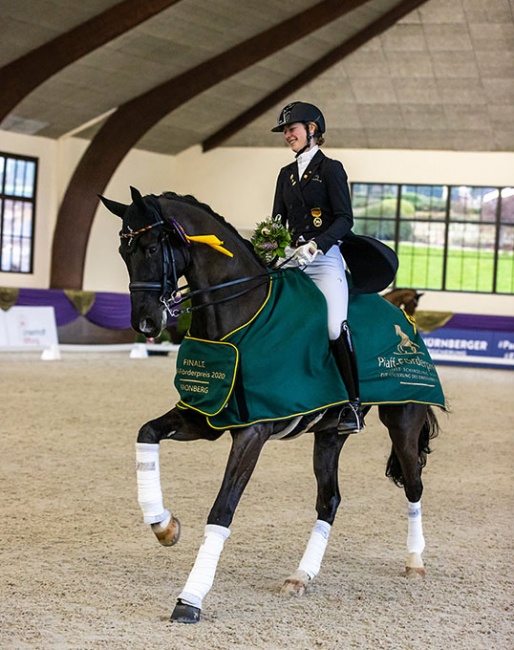 Ann-Kathrin Lindner and FBW Sunfire became the expected winners of the 2020 Piaff Förderpreis Finals held at Gestut Schafhof in Kronberg on 19 - 20 December 2020.

From Stuttgart to Kronberg

The Piaff Förderpreis is the official show circuit for German Under 25 riders. Each year fifteen combinations are selected at a training and selection seminar in February and they are eligible to compete at the qualifiers.

This year's winner of the seminar - Anna-Louise Fuchs and the 10-year old Chilly Jam - did not make it to the Finals as the pair was unable to compete on the circuit.

The finals normally take place at the CDI Stuttgart but due to the corona pandemic they were rescheduled for a closed-door competition at Gestut Schafhof, where also the Nurnberger Burgpokal and Louisdor Cup Finals took place.

As team silver and short Grand Prix test gold and Kur bronze medal winner at the 2020 European Under 25 Championships, Ann-Kathrin Lindner and  her 11-year old Wurttemberger bred FBW Sunfire (by San Amour x Freudenfeuer) arrived in Kronberg as the clear favourites for the title and they delivered.

The Finals have a warm up round (Intermediaire II) followed by the classic Grand Prix test to decide the winner. For some U25 riders it was the first time that they competed in the "long" Grand Prix and for that reason the finalists had been invited to a special training seminar with German team trainer Monica Theodorescu and U25 team trainer Sebastian Heinze in preparation of Kronberg.

Lindner and Sunfire scored 75.5% in the Grand Prix and finished a brilliant year with another victory.

"I'm super happy and thrilled to have finished the year like this," said Lindner, who is trained by Karl-Heinz Streng. "Today in the final test you could notice we were on point.

Westendarp competed two Grand Prix horses this season, her own Der Prinz and Hof Kasselmann's Hicksteadt, which she rode to team silver at the 2020 European Under 25 Championships in Budapest.

For the Förderpreis Finals she opted to ride Der Prinz and placed second in the warm-up round as well as in the Grand Prix. She scored 72.420%.

Westendarp is trained at Hof Kasselmann, as well as by her father Johannes Westendarp. Alexa also has been coached by Klaus Balkenhol.

The third place went to the 24-year old Ellen Richter, who is slowly coming back into the spotlight.

Richter rode on the German team at the 2014 European Junior Riders Championships aboard Fontane. In 2015 and 2016 she briefly rode him at international Young Riders level, but since then has not been out in the CDI ring.

With the 9-year old Westfalian gelding Vinay (by Vitalis x Warkant) she has a new iron in the fire. Trained by Olivier Oelrich, Richter scored 72.240% to finish third in the Piaff Finals.

German U25 team trainer Sebastian Heinze commented," Ann-Kathrin is an absolute test rider, very ambitious and always focused. It was a great Finals. You can really look forward to the future when you see how well the riding has been here and what scores the top three place-getters achieved, and they haven't gone a long way at Grand Prix yet."

"The Final were the highlight at the end of the season to which everyone looked forward," Heinze continued. "Everyone had to be flexible this year as the show calendar kept changing due to corona. But also the show organizers were flexible. We were very happy that the European Youth Championships took place and that they were so successful for us. When it became clear that Stuttgart was cancelled and it turned out Frankfurt wouldn't happ, we are grateful to the team at Schafhof for coming to the rescue and offering us such great facilities."

For next year Heinze looks forward working with his U25 squad as none of them have reached the age limit.

"Next season we can rely on the experiences the horses and riders gathered this year," he concluded.