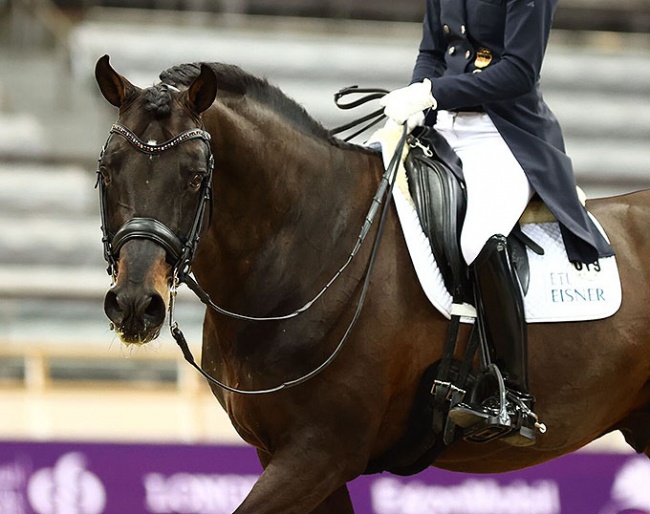 Surprisingly Doha, Qatar was chosen as retirement show, far away from the actual dressage world. However, the door has been left open for Helen and Damsey to compete in one or two more shows in Europe this season.

"We had talked about retiring Damsey in Frankfurt originally with all the people who love him there but Covid changed that," Louise Leatherdale told Eurodressage.  "Susanne and Helen talked with me just 4 days ago and we all agreed we need him to retire when he can still show his ability at its highest and not allow him to go down in scores simply for being old!  This horse behaves and competes like he is 12 not 19! He deserves all!"

After competing in two internationals in Mariakalnok and Aarhus in the 2020 covid year, Langehanenberg and her Grand Prix partner of 6 years, Damsey, accepted the invitation to show in the CDI 5* in Doha, Qater, on 24 - 27 February 2021.

In an interview with Dressursport Deutschland, Langehanenberg describes her time with Damsey as "breathtaking, challenging and just beautiful. I learned a lot of acceptance from him. I can have everything from him, but he would also like to demand something in return and you had to take him the way he was."

Helen also stated, "“Even though we've been considering when and where to retire Damsey, the decision for it to take place in Doha was quite spontaneous. It would have been nicer and certainly preferred to do this in Germany in front of ′′his′′ audience, but in times of coronavirus, his owner Louise Leatherdale, his co-owner Susanne Meyer and I agreed that it simply cannot be planned."

Damsey is a Hanoverian stallion by Dressage Royal out of Ria Grande (by Ritual x Grande). He is bred by  Dorit and Hermann Kothe.

Dutchman Hans Miedema purchased the 2.5-year old youngster at the Verden Stallion Market in 2004 as a non-licensed stallion.

He was licensed one year later at the April saddle licensing, where he became the only premium stallion after winning the 30-day stallion performance test in Adelheidsdorf. Damsey briefly moved to Ferienhof Stucker in Weeze, where Wilbers introduced the stallion to Jens Meyer, who then alerted Doug and Louise Leatherdale. Right before Christmas 2015 the American couple acquired Damsey and moved him to Jens Meyer's stallion station.

There Inga von Helldorff first received the ride on Damsey and first competed him. They were sixth at the 2006 Hanoverian Young horse Championships in Verden and third at the 2007 Bundeschampionate.

In 2008 Steffen Frahm took over the ride. He placed 7th at the 2008 World Young Horse Championships in Verden and 8th at the 2008 Bundeschampionate. In 2011 they were 11th in the Nurnberger Burgpokal Finals in Frankfurt and 12th in the 2012 Louisdor Cup Finals.

The pair made their international Grand Prix debut at the 2013 CDI Wiesbaden. They did not compete at CDI's in 2014 and only did one international in 2015 at the CDIO Rotterdam. When Frahm left stallion station Meyer for Hof Kasselmann, he lost the ride on the stallion.

In 2016, Damsey was allocated to Helen Langehanenberg. A year later they were members of the gold medal winning team at the 2017 European Championships in Gothenburg. In 2019 they were third in the World Cup Finals in Gothenburg. Twenty times, the pair scored over 80% in a freestyle.  In 2020 Damsey lost his German A-squad spot despite still being fit to compete, most likely being ruled out for team selection due to his age.

At the 2021 CDI 5* Doha, Damsey closed out his career with an impressive score of 82.05% and second place in the Grand Prix Freestyle.

"Plans will continue going forward for his future life .  The important thing we feel as he owes us nothing and we owe him everything," Louise told Eurodressage.

"He is a remarkable stallion and his offspring are proving to be sensational too!  Helen is training his daughter Daniela (by Damsey FRH out of Helena (by His Highness)) and I have a sister here in MInnesota, Duchess (by Damsey FRH out of EM De La Rosa (by De Niro)) that are mini me’s of Damsey. I have other Damsey offspring at Hengststation Meyer as well  that will start there."