Where Are They Now? Elfenfeuer 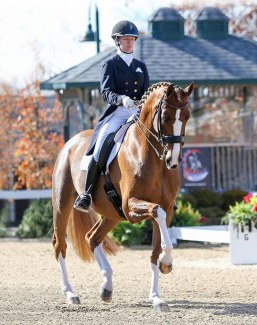 This year Alice Tarjan rode onto the centerline of the legendary arena at CHIO Aachen. For many Europeans her name is unfamiliar, but in the U.S.A. she has established herself as an international Grand Prix rider and trainer who successfully scouts and buys top youngsters in Europe and develops them to the highest level.

Tarjan's international dressage career started in 2015 with the Oldenburg mare Elfenfeuer. A year later the chestnut beauty disappeared from the scene. Where is she now?

Elfenfeuer is a 14-year old Oldenburg mare, born in 2007 and bred by Ewald Grotelüschen.

She is out of the renowned Elfenblume dam line. Sired by Florencio and out of Elfensonne (by Sion x Figaro x Goldstern).

In 2010 Elfenfeuer did her mare performance test and was presented at the Oldenburg Elite Mare Show in Rastede, where she became a State Premium candidate, but did not make it into the Brilliant ring.

Tarjan discovered her at the 2010 Winter Mixed Sales auction in Vechta and purchased the horse.

In 2014, the extremely talented mare made the big leap to Grand Prix at age 7 and became the Grand Prix Adult Amateur Champion at the 2014 USDF Finals. Elfenfeuer also finished second overall in the USDF Grand Prix Dressage Horse Of The Year overall standings.

In 2015 the pair made its international show debut at Grand Prix level in Wellington, scoring in the mid sixties range. They competed at four CDI's at the Global Dressage Festival with scores climbing to 69% at their last international.

In 2016 Tarjan's trainer at the time - Danish Lars Petersen - took over the ride and competed the mare in two CDI's in Wellington, obtaining 65.2% in the Grand Prix and Special, but unfortunately getting eliminated in the second one.  As a Grand Prix horse Elfenfeuer stood out with exceptional passage work and uphill flying changes, but she found the walk and piaffe quite difficult to manage.

Since then Elfenfeuer disappeared from the scene. Where is she now?

Where is She Now?

Eurodressage contacted Alice Tarjan to inquire where the beautiful mare is now. She confirmed that Elfenfeuer sustained a career ending injury in 2016 and was pulled from sport. Fortunately she has been a happy brood mare ever since and is leading the luxury life at Hilltop farm in the U.S.A.

"She is doing well, retired and at Hilltop," Tarjan told Eurodressage. "Hilltop has her on a lease as a broodmare and she moved there last winter."

"We’re so grateful to Alice for allowing us the opportunity to have Fury here in our breeding program," said Natalie DiBerardinis, managing director of Hilltop farm. "She’s in foal for 2022 to the Van Olst stallion Kjento."

Before the move to Maryland, Tarjan bred three foals out of her mare: Geistfeuer (by Grand Galaxy Win) and Spectrefeuer (by Secret), which the mare carried herself, and the 2018 born filly Elfenadler H20 (by For Romance), which is bred by embryotransfer by Kendra Hansis of Runningwater Warmbloods. Elfenadler is currently in foal to Diesel CF (by Dressage Royal x Ritual), the full brother of Damsey. Geistfeuer is with rider Mallory Chambers.

Read more articles in our Where Are They Now series