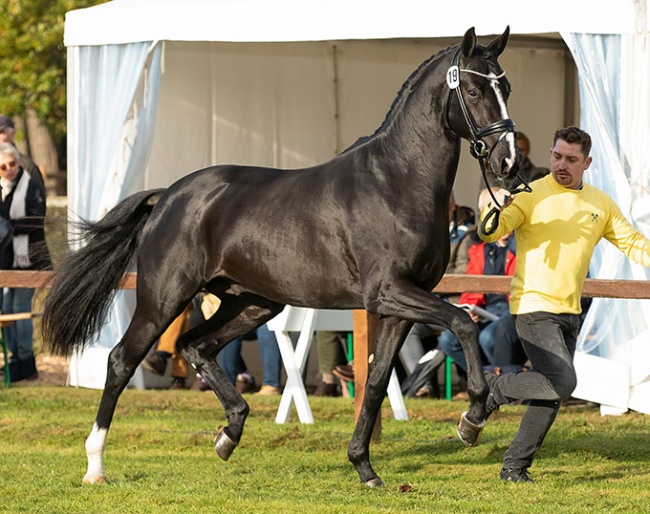 Energy (by Escamillo x De Niro) led a group of six premium stallions as the auction price highlight of the 2021 Hanoverian Stallion Licensing in Verden, Germany.

The three-day licensing concluded in Saturday 6 November with the announcement of the premium stallions and subsequent auction of the horses. This highlight event on the annual Hanoverian breeders' calendar saw a surge of the E-bloodline at its 2021 edition.

55 dressage stallions were presented for licensing and 31 of them were licensed. Six of them were decorated with the premium title.

Since 2008 the Hanoverian breed society no longer names a champion stallion, so the stand-out horse of the collection now is determined by commercial value, i.e. the highest auction price

Bred and presented by Camilla Törsell and Carsten Johansen's 2M2 Horses from Bastadt, Sweden, the black Escamillo colt out of Darina (by De Niro x Prince Thatch xx) led the group of six premium stallions. Originally named 2M2 Equestria, this young stallion sold at auction for the top price of 700,000 euro to Austrian gun billionaire Gaston Glock, who promptly renamed the horse "Glock's Energy". He will move to The Netherlands and go in training with Dutch team riders Hans Peter Minderhoud and Edward Gal.

The Escamillo presented his first crop of offspring at the licensing and had five of them in the running. Four of them were approved and one was named premium, Energy. Escamillo's sire Escolar also presented five offspring, three were licensed and one was named premium. Bred by Hermann-Josef Thoenes and owned by Theo Lenzen, this Escolar x Sir Donnerhall sold for 180,000 euro to Felix Ferdinand Becker.

The third premium stallion is Bonhöffer (by Bon Coeur x Carabas), bred by Dirk Schröder and presented by Christine Klaewer. He comes from Weltmeyer's dam line and sold for 300,000 euro to State Stud Celle.

Johannes Westendarp and breeder Josef Brinkemöller have been collaborating for years and once more presented a licensed stallion in Verden that got premium. Their chunky chestnut Take That (by Totilas x Danciano) sold for 370,000 euro to the Wahler family of Klosterhof Medingen. Shortly before the auction, Burkhard Wahler was honoured with the Fritz von der Decken Prize for being the most successful exhibitor of the stallion licensing of the past ten years.

The owner of stallion Danciano, the French Haras de Malleret, purchased the premium stallion Fürst Belissaro x San Remo, bred by Jan Schomaker and owned by Heinrich Gießelmann. The strong moving bay stallion out of the line of foundation sires Pik Bube I and II sold for 210.000 euro.

The sixth premium stallion by For Dance x Dagostini was not for sale. Bred by Christoph Plate and owned by the Danish Blue Hors stud, he will move to the Warendorf State Stud.

The 26 licensed stallions achieved a total average price of 125,346 euro.

This year's Hanoverian stallion licensing was again open to the public after a closed session in the 2020 corona year.  There was a great domestic and foreign interest in the stallions who followed the licensing on the scene as well as online.

In the end, German customers prevailed in the auction as 22 colts will remain in Germany.  Of the licensed stallions without a premium, the Escamillo x Bon Bravour was the most expensive, fetching 200,000 euro. He is bred by Christina Beuke and was presented by Sönke Rothenberger's Xenophon 2 company.

The Livaldon x Warkant x Sherlock Holmes sold for 190,000 euro. He is bred by Fred Helberg and was presented by Heinrich Giesselmann.

From his second crop Secret had four colts in Verden but only one got licensed. Nicol Schachtmann's bay Secret x Sandro Hit sold for 100,000 euro. He is bred by Ekhard Wahlers.

The 22 non-licensed stallions cost an average price of 38,364 euro.

A Canadian bought the chestnut colt by Zackerey x For Romance, bred by Ruwe-Rovekamp, for 50,000 euro.  A Swede invested in Günther Blöthe's black colt by D'Egalite x San Amour for 36,000 euro. A Spanish client bought the 9 Da Costa x Hampton for 18,000 euro.

This year Danish super buyer Andreas Helgstrand and his partner Paul Schockemöhle seemed not interested in spending the big bucks at the auction. Helgstrand presented a black Springbank II x Furst Romancier, which was pulled mid-way through the licensing and removed online from the list of participating stallions.