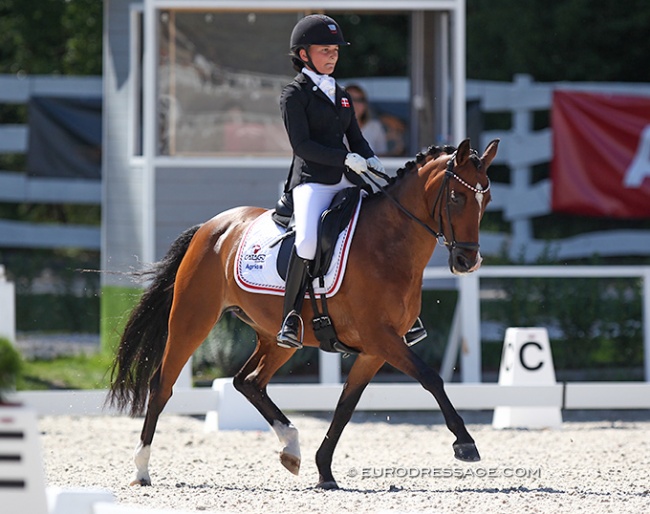 The 139 cm category II pony began its show career in Denmark as a 6-year old under Frederikke Aagot Jabina in 2013.  In 2016 the pair finished 10th in category II at the Danish Pony Championships.

The pair consistently showed at national FEI pony level until the summer of 2018.

In the autumn of 2018, Dot Com sold to Josephine Gert Nielsen, who had a successful 2.5-year partnership with the mare.

They made their international show debut in May 2019 at the CDI-P Uggerhalne. They scored team and individual gold in the category II FEI pony division at the 2019 Nordic Baltic Championships in Aarhus. They also won gold at the Danish Category II Pony Championships/

In the spring of 2021, Dot Com was allocated to a new rider, Danish Sofia Rosenkilde, who competed the pony nationally.

The new duo made its national show debut at the beginning of May at the regional show in Viborg, followed by starts in Hjallerup, Hedensted, and Svenstrup, all in one month's time.

At the 2021 Danish Pony Championships for category II ponies in August, they won bronze and they were second at the 2021 Ecco Cup Finals in November. It was their last show.

After having competed in and for Denmark for nine years, Dot Com has now been sold to Sweden.

He has been acquired by renowned Swedish Olympian Jan Brink as the schoolmaster for his 10-year old son Oliver. They are based at Tullstorp Dressage in Hässleholm.

"Our best Dot Com is now sold to the most perfect home," said Josephine. "Oliver will be the lucky rider of Dot, and I know they will rock together. I can’t thank this pony enough - she really is one of a kind and so special to our family. Congrats to Oliver and his family, I think we have found a perfect match."