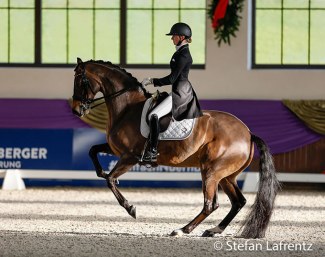 Semmieke Rothenberger and her Dutch warmblood mare Flanell became the winners of the 2021 Piaff Forderpreis Finals held at Gestut Schafhof in Kronberg, Germany, on 18 - 19 December 2021.

The Piaff Forderpreis finals for German Under 25 riders are traditionally taking place during the CDI Stuttgart in November, but due to the covid cancellation of the show they were moved to the CDI Frankfurt in December, which got called off too. All three German circuit finals - Piaff Forderpreis, Nurnberger Burgpokal, and Louisdor Cup Fihnals - then moved to Gestut Schafhof in Kronberg on the outskirts of Frankfurt, where they also took place behind closed doors in 2020.

Between 8 and 9 combinations participate in the finals at the end of the season. It starts with a training and selection seminar in Warendorf in February, in which this year 31 pairs participated and 14 were nominated to ride the qualifiers this spring and summer. In the end, usually less than 10 combinations actually seriously end up competing at the qualifiers.

Rothenberger and Flanell Finish the Year with the Title

Seasoned German youth team rider Semmieke Rothenberger easily cruised to the title and victory aboard the 11-year old Dutch warmblood mare Flanell (by Apache x Don Schufro) in the absence of two of her European U25 Championship team mates Raphael Netz (on top ride Elastico) and Ellen Richter (Vinay). Netz and Elastico won individual gold and was considered to be the biggest rival for Rothenberger in the Piaff Forderpreis. Instead Netz opted to ride the younger, less experienced Exclusive BB (by ) and finished fifth.

Rothenberger and her talented bay mare impressed the panel of judges, consisting of German 5* judges Henning Lehrmann, Elke Ebert, Ulrike Nivelle, Evi Eisenhardt, and Katrina Wüst. They won the warm-up round (Intermediaire II) with 74.907% and reigned supreme in the Grand Prix finals with 74.50%. Four judges had the pair first, one placed them second. The individual marks ranged from 74.00% to 75.10%.

The 22-year old Semmieke follows in the footsteps of her sister Sanneke, who won the Piaff Forderpreis in 2015 on Wolke Sieben.

"It was very nerve wrecking to ride the long Grand Prix for the first time and then straight away in the Piaff Forderpreis finals, but I think  we handled it well and I'm very happy," said Semmieke, who won team gold and individual silver and gold at the 2021 European Under 25 Championships in Hagen in September. "I tried to ride one movement after the other. I know my horse has no weaknesses and can do everything, it just all depended on me as a rider to show that. I think there is still plenty more in the tank, but I'm thrilled with this first long Grand Prix and never thought it would go this well."

Rothenberger has been riding Flanell since the spring of 2020, when her father bought the young Grand Prix mare from breeder and trainer Veronique Roerink in The Netherlands. Roerink's Flanell was not an unfamiliar face to the show ring.  They finished seventh in the 6-year old division at the 2016 World Championships for Young Dressage Horses in Ermelo, The Netherlands.  Their small tour debut followed in 2017 and they tried to get selected for the 2017 World Young Horse Championships but did not make it. Their international debut was at the 2018 CDI 1* in Ermelo, followed by the CDI Cappeln the week after, where they won the Prix St Georges. Their last international was the CDI Exloo in October 2018.   Flanell's big tour debut followed in September 2019. They achieved B-squad submission scores of 72.77%  in Genemuiden and 70.181% in Haskerhorne. At the start of 2020% they scored 78% in the Kur in Groningen and 73% at the CDN Tolbert. The pair's international Grand Prix debut was planned for the 2020 CDI-W 's Hertogenbosch, which got cancelled due to the outbreak of the corona pandemic. Flanell sold to Rothenberger in May 2020.

"Today it was so much fun to ride the entire test," said Lindner after placing second in the Piaff Forderpreis. "You don't have a lot of time between the movements but I really had a great feeling and looked forward to each movement. At no point did I have the feeling that my horse was distracted. He was 100% with me and waited for my aids. I'm truly very, very happy that I can finish my U25 time with such a fun ride."

Lindner's Sunfire is listed as owned by Volkmar Reinhart Andre with the German FN and was first competed by Kim Kroh as a 4-year old in 2013. In 2015 Lindner began showing the 6-year old right after Udo Bosch-Mayer did one competition with him in Kreuth. She trained the black up to Grand Prix level with the help of her mother.

For Aline Schrader the 2021 Piaff Förderpreis finals was a big party as she celebrated her 23rd birthday on Saturday when the warm-up round was ridden.

The Hamburg based Schrader was the winner of the 2021 Piaff Forderpreis selection trial in Warendorf, but could not prove to be a consistent player at the top of the ranking this season despite good scores. At the 2021 German Under 25 Championships, she was 11th and 13th. However, the pieces of the puzzle came together in Kronberg and Schrader and her 12-year old Paola (by Lord Loxley x Friedensfurst) were third in the warm-up round with 69.977% and third in the final Grand Prix with 69.980%

It was Alina's first time riding in the Piaff Förderpreis finals and a small communication blip on the last centerline in the finals kept the score from climbing over 70%.

"I'm overjoyed to just be able to ride this mare here," said Schrader after her third place finish. "We went through so much this year and she gave it her all for me. OK, she let me down a bit on the last centerline, you can say it like that, but she was a bit scared at X and rather stands, but she still gave me a super feeling and I was able to really ride her. She sees ghosts sometimes and then becomes introvert, but she pulled herself together and I could rely on her and she could rely on me."

Schrader began competing Paola in 2015. The mare was first competed as a 5-year old by Katharina Stern the year before. In 2017 they moved to small tour level and by 2020 they were doing their first Intermediaire II tests. The pair trains with Hartwig Burfeind.