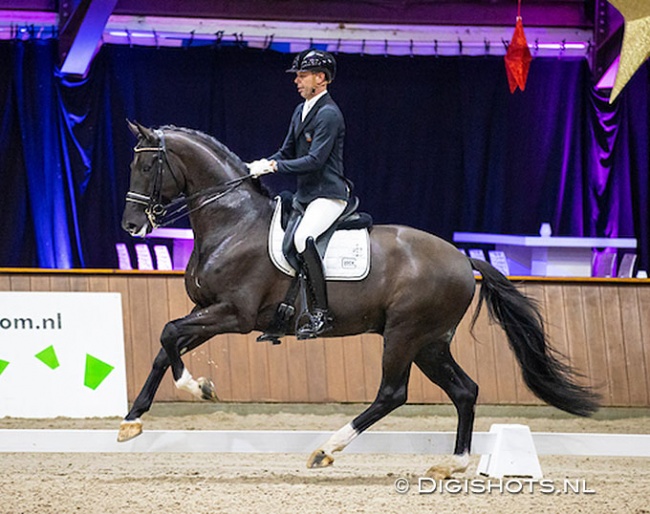 The 5-year old McLaren, 6-year old Las Vegas, and the 7-year old Taminiau were the repeat winners in the third and final leg of the 2021-2022 KWPN Stallion Competition of which the finals will be held at the 2022 KWPN Stallion Licensing in Ermelo.

The third qualifier took place in Exloo instead of Zuidbroek and it was the identical trio of stallions that won yet again.

The KWPN Stallion Competition is not mandatory of Dutch warmblood licensed stallions. I's a more an opportunity to give young colts some ring experience and the breeders to see them in action.

The Finals are scheduled for 5 February 2022 and will happen behind closed doors. The event will be streamed live.

The L-level division for rising 5-year olds was judged by Monique Peutz and Veronique Roerink and they saw the winner in Dinja van Liere aboard the German bred McLaren (by Morricone x Sir Donnerhall). Owned by Reesink Horses, the bay scored a total of 88 points with an 8 for walk, 9 for trot, 8.5 for canter, 9.5 for harmony and 9 for overall impression.

Van Liere also captured second place aboard Turfhorst and Reesink's Dutch bred Mauro (by Zonik x Negro). He finished on a total of 85 points with a 9 for walk, 8.5 for trot, 8 for canter, and 8.5 for harmony and general impression. The NRPS licensed stallion Gorgeous Black Art (by Toto Jr x Rubiquil) also earned 85 points but placed third. Owned by Stable Hexagon and presented by Hungarian Benedek Pachl, this black got 8 for walk, 8.5 for trot, 8.5 for canter, 9 for harmony and 8.5 for general impression.

Franka Loos and the tall Dutch warmblood stallion Las Vegas (by Ferdeaux x Wynton) were the high scorers of the day with 91 points. Owned by Nico Witte and De Dalhoeve, the bright bay stallion got 8.5 for walk, 9.5 for trot and canter and 9 for harmony and general impression.

The smallest class, traditionally, is the Z-level division and in Exloo there were four combinations for it.

Hans Peter Minderhoud and Gaston Glock's KWPN bred Taminiau (by Toto Jr) topped the board with 89 points. The stallion, who is a mirror reflection of his sire, got 8.5 for walk, 9 for trot, canter, harmony and overall impression.