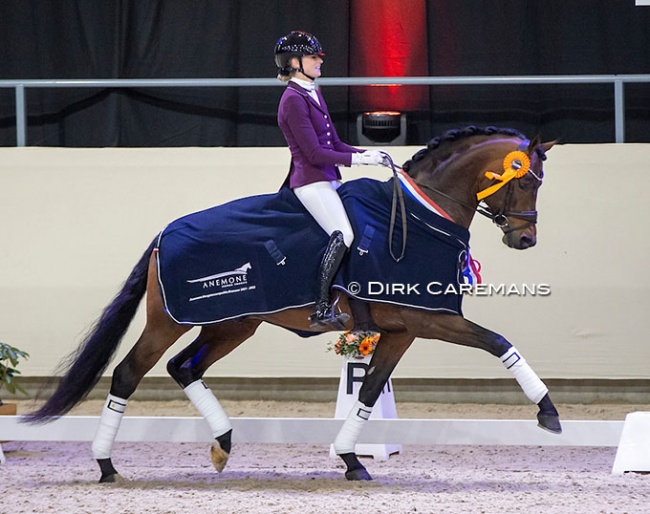 The 5-year old McLaren, the 6-year old Las Vegas, and the 7-year old Taminiau became the winners of the 2021-2022 KWPN Stallion Competition Finals, which took place on Saturday 5 February 2022.

There was little surprise to the outcome of these Finals, which happened after the Stallion Licensing at the KWPN headquarters in Ermelo. The winners of all three qualifiers - the identical trio of McLaren, Las Vegas, and Taminiau that was first in Kronenberg, Ermelo and Exloo - also won the Finals, which were streamed live as the event was behind closed doors.

To determine the winner of the Finals the scores of the three qualifiers as well as the points at the finals are totalled.

Just four horses did all three qualifiers as well as the finals, but eight showed up at the finals to be assessed. The rising 5-year olds performing at L-level were judged by Bart Bax, Mariette Sanders, and Monique Peutz.

Holland's new Grand Prix starlet Dinja van Liere piloted Eugene Reesink's German bred McLaren (by Morricone x Sir Donnerhall) to the victory. The stallion received 8 for walk, 9 for trot, 9.5 for canter and harmony and 9 for general impression. With a subtotal of 273 points after the qualifiers and a total of  90  points in the finals, McLaren was the overall winner with 363 points. The bay was praised for his rideability "he's beautiful, elegant appearnace. Dinka presents him really well. He's a charming stallion with a lot of potential for the future," said Peutz.

Van Liere also finished second with Turfhorst and Reesink's Dutch bred Mauro (by Zonik x Negro). They had 258 points after the qualifiers and added 86 points to that total in the finals to become the runners-up. Mauro got 8.5 for walk and trot, 9 for canter, 8.5 for harmony and general impression.

Swedish Jessica Lynn Thomas and Gestut Schafhof's Dutch bred Maddox Mart (by Hennessy x Bordeaux) landed third place.  He had collected 253 points after the qualifiers and received 85 points in the finals to finish third overall. The black stallion got 9 for walk, 8 for trot, 9 for canter, 8 for harmony and 8.5 for general impression.

Six rising 6-year olds ended up being in the running for a top placing at M-level.

Franka Loos and the 2021 WCYH finalist Las Vegas (by Ferdeaux x Wynton) were unbeatable in the Finals. They had a significant lead after the three qualifiers (279 points) and added 89 points in the finals to that tally. "The stallion stands out with his strength, power and energy. He moves with a lot of cadence and seems nice to ride," said judge Peutz. The massive, 180 cm standing Las Vegas is owned by Nico Witte and De Dalhoeve,

In the Finals Dinja van Liere and Iron Spring Farm's Lowlands (by Millennium x Donnerball) were right on Las Vegas' heels with 88 points. With 259 points from the qualifier, the American owned stallion placed second overall.

Jill Bogers and Lennox U.S. (by Grand Galaxy Win x Rousseau) placed third with 87 points in the finals and 249 from the qualifiers. The judges rewarded the stallion with 7.5 for walk, 9 for trot and canter, 9.5 for harmony and 8.5 for general impression.

Just one stallion completed all qualifiers and the finals to achieve a ranking in the overall results for rising 7-year olds at Z-level. Four combinations competed in the qualifiers. The ones not completing the mission were Jheronimus, Jameson, and Kaygo. Jheronimus was a no-show and the other two were in Ermelo but performance in a presentation show as part of the K-crop.

Hans Peter Minderhoud and Gaston Glock's KWPN bred Taminiau (by Toto Jr x Sandro Hit) collected 271 points in the qualifier and 92 in the finals. The black stallion got 9 for walk, trot and canter and 9.5 for harmony and general impression. "His walk is very powerful, in trot he crosses the legs well in the half passes and they are beautifully balanced. In canter the stallion has a big stride and ability to collection," said judge Peutz.