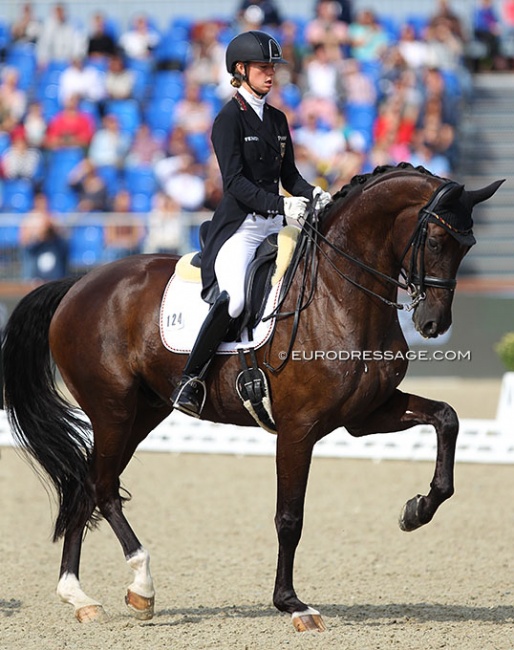 Sunfire, the horse which Ann-Kathrin Lindner rode to gold at the 2020 European Under 25 Championships, has moved to Helgstrand Dressage to be sold.

Sunfire is a 13-year old Baden Wurttemberger bred gelding by San Amour out of Fantasie (by Freudenfeuer x Puschkin x Vierzehnender xx). He is bred and owned by Volkmar Andre.

The dark bay gelding was first competed as a 4-year old in 2013 by Kim Kroh. In 2015 Udo Bosch-Mayer rode him before young Ann-Kathrin Lindner took on the ride.  They moved up to S-level in 2017 and to Grand Prix level in 2019.

Lindner and Sunfire made their international show debut at the 2019 CDI Mannheim, where they finished second twice. They also competed in Riesenbeck and were selected on the German team that won gold at the 2019 European Under 25 Championships in San Giovanni in Marignano. Individually they were fifth and seventh.

In the 2020 corona year they won the team qualifier at the CDI Hagen and at the 2020 European Under 25 Championships in Pilisjaszfalu, they got team and short grand prix test gold and kur bronze. They also won the 2020 Piaff Forderpreis finals.

Breeder and owner Volkmar Andre decided it was time to sell the horse and Helgstrand struck the deal. The horse has moved to the German branch at Gestut Famos.

To the German magazine Reiterjournal Ann-Kathrin Lindner's father Werner stated that the sale was done in "mutual agreement" between the family and the owner, even though Ann-Kathrin is "naturally very sad."

Lindner gave up her part-time job as physiotherapist in 2020 to go fully professional as a rider.