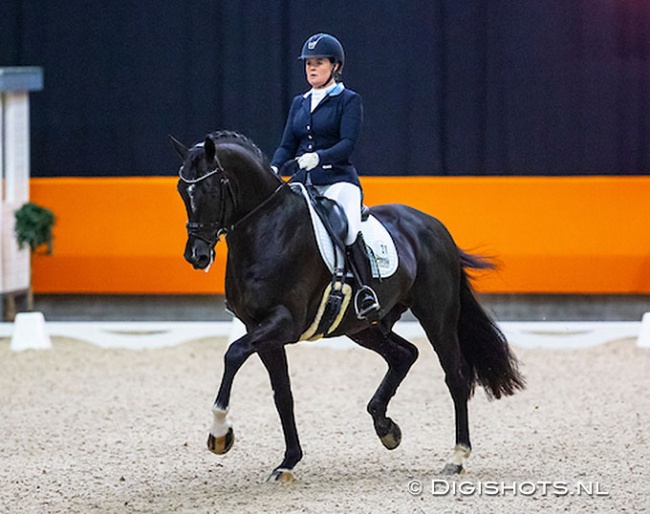 Edward Gal's newest Grand Prix ride Indigro has already left his barn. The 9-year old has been sold to U.K.

Indigro is a 2013 born Dutch warmblood stallion by Negro out of Pralina (by Jazz x Ulft). He is bred by J. Deenen.

First owned by Joop van Uytert and Indonesian Titan Wilaras, Indigro was licensed at the 2016 KWPN Stallion Licensing and placed fourth in the 2016 KWPN Autumn Stallion Performance Test with 81.5 points.

In 2017 Wilaras obtained full ownership of the stallion.  Kirsten Brouwer and Indigro finished12th place in the 2017 Pavo Cup Finals. Danique Janssen  competed him in the 2017-2018 KWPN Stallion Competition circuit.

In 2019 the stallion sold to Rom Vermunt and Harld Bruinier in a blow-out sale. Under Jennifer Sekreve he competed on the 2019-2020 KWPN Stallion Competition circuit and won the 2020 Dutch Winter Championships at Medium level in February 2020. In October 2020 Indigro moved to Edward Gal's yard who trained him to Grand Prix level.

Horses.nl reported that Indigro has been sold to British Max and Tatiana Skillman.

Andrew Gould made his show debut last weekend at the national show in Hickstead, where they placed second in the Intermediaire II with 72.500%.

"This was a last minute decision to go to Hickstead for our first show together, and what a great experience it was, could not be happier with the feeling he gave me in the arena. Even got a 10 for his passage," Gould wrote.

The Skillmans also own Gould's Genie (by Zhivago x Sandro Hit), while Tatiana rides herself and has been competing Essien (by Wynton x Houston) and Erano (by Vivaldi x Cabochon) in the past three years. The couple runs a wholesale of mining, construction and civil engineering machinery and has a love for her horses.