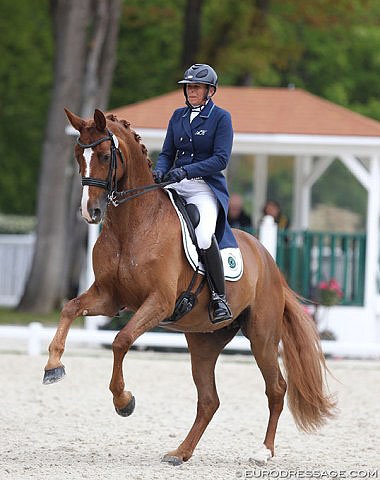 Ginsegue is a 16-year old Belgian warmblood mare by Welt Hit II out of Habile Fontaines (by Livingstone). She is bred by F. Fuveille and E. Dekens in Belgium.

Nicole and Ginsengue became a combination nine years ago. The pair made it's international show debut in 2015 at Medium tour level at the CDI Saumur, followed by Pompadour. They won all four classes.

In the autumn of 2015 the horse moved up to Grand Prix level at the autumn CDI in Saumur and posted 64.400% in his first Grand Prix.The pair competed consistently at the highest level at internationals through 2020. They represented France at the FEI Nations Cup at the 2017 CDIO Hickstead and 2019 CDIO Geesteren. Although team trainer Jan Bemelmans short-listed them for team selection, they never made the final cut. Their Grand Prix high score was 70.220% at the 2017 CDI Pompadour. In 2017 they won bronze at the French Grand Prix Championships.

At the 2020 CDI Le Mans he was withdrawn from the Grand Prix and half a year later retired at the CDI Compiegne. The horse had a break from competition due to an injury and returned to competition at the 2022 CDI Le Mans in February, where they posted 65.087%.

Dressprod reported the rider switch on 19 May 2022. Marine Soulet, who compted Osado and Talitie at Grand Prix level, is the daughter of Nicole Favereau from her first marriage with Pierre Subileau.

"I could no longer ride Ginsengue as I used to. She recovered well from his health issues. Still I find it hard to pick her back up, because I always had the fear that she would inhjure herself again even though she was doing well and is perfectly taking care of," Nicole told Dressprod. "After a year of fearing for her health, I have struggled to ride her in earnest. The day after the CDI Le Mans I thought about it and proposed to Marine to ride her. She first refused, but in the end accepted. She has ridden her many times before at home when I was gone."

Marine Soulet made her show debut on Ginsengue at the national event in Limoges and posted 68.511% in the Grand Prix. This is not the first time the pair has gone into the show ring, Marine also piloted the horse in 2012 as a 6-year old at French shows before her mum took over.