Road to Herning for Danish Team Candidates - Bohemian to Aachen, Jovian to Hagen 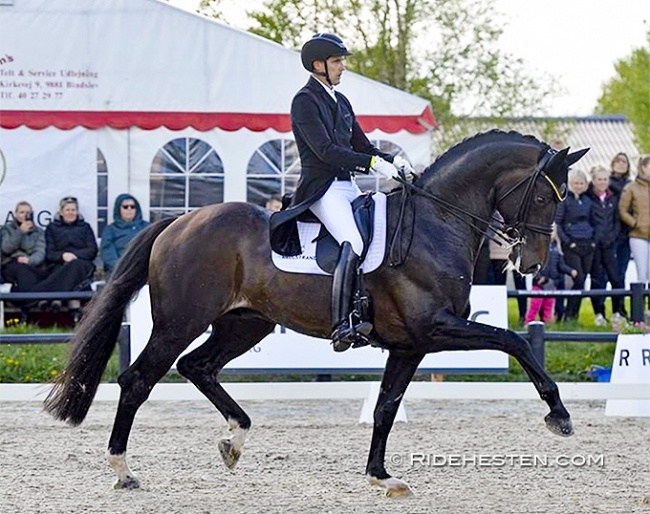 With Denmark marked as clear favourite for the team gold medal at the 2022 World Championships Dressage in Herning in August, the path Danish team candidates are taking in the next months is followed with eagle eyes by the dressage world.

This week a first official team observation trial takes place at the Danish Dressage Championships, but many of the team favourites will be absent from this event: No Bohemian, no Heiline's Danciera, and now Jovian.

Ridehesten.com posted the competition plans of Denmark's top candidates and disclosed that Dufour will be riding Vamos Amigos at the Nationals, while  Helgstrand is taking Queenparks Wendy, and Daniel Bachmann with his rising GP horse Zippo MI as Andreas sold Daniel's team horse Marshall Bell out from under him this week.

Instead, Helgstrand and his 8-year old KWPN stallion Jovian (by Apache x Tango) will be heading to the CDI Hagen on 13 June, where he needs to score his second MER in order to be eligible to compete in the 5* tour as his goal show, the final Danish team selection trial at the CDIO Aachen (1 - 3 July).

Helgstrand earned his first MER score in his backyard at the CDI Aalborg, where an international panel of judges (Nysten, Judet, Truppa, Andersson, Peutz) rewarded his Grand Prix with 77.130%, and a Scandinavian coloured panel (Judet, Prip, Andersson, Danzberg, Sogaard) scored his Special with 77.915%. The Danish judge Kirsten Sogaard gave it an 81.489% after she had already generously praised the horse for his national Inter 2 debut with a 7% higher score than the judge at C. At this national show Jovian showed plenty of talent in his gaits, but was uneven in the passage, tense and looking in the indoor arena, and the piaffe was a work in progress.

Jovian's national Grand Prix debut in Aarhus on 25 March brought about even more ridicule to the judges' system when judge Lone Dichmann rewarded Jovian's far from flawless first Grand Prix test with an 88%, which was 8% more than her equally enthused colleague Prip, who had the horse at 80%.

The double Young Horse World Champion Jovian is the center of attention of the dressage world as this 8-year old is rocketed into the Grand Prix tour with no time to catch a breath and what seems one goal: a Danish team spot to strive for gold. There is no doubt that this stallion has a phenomenal trot and canter, especially in the extensions, but he cannot hide the fact that he is extremely green and not ready for such a big task, often hollowing the back, not stretching into the contact, nor lengthening the frame. In the ultimate proof of true self-carriage and balance - the piaffe - he fails with his handstand piaffe in which he falls on the forehand and crosses the hindlegs.  An extra year to slowly mature and develop in the Grand Prix work seemed wiser, but when when money and glory are at stake on home turf in Denmark - at a show sponsored by Helgstrand -  there seems no time to waste.

Cathrine Dufour is also a rider who takes her horses quickly into the Grand Prix and shows them at Grand Prix level at age 8, but the road she takes there is totally different with another training system.

Dufour rides extremely hot horses and her training goal is to instil relaxation into them. Although both Bohemian and Vamos Amigos often lack lateral bending in the body, they are gymnasticized more, show a friendly bridle contact (sometimes evading the contact), but it's soft and pleasant to watch.

Dufour, who won team bronze, Special bronze and Kur silver with Bohemian at the 2021 European Championships, is the number one in Denmark at the moment and will take Bohemian (by Bordeaux x Samarant) straight to the last team selection trial in Aachen.

"Aachen is not really my favourite show, but it's an important competition because it's part of the selection for the World Championships, Dufour told Ridehesten. "It's a good place to test the atmosphere and after a long indoor season, it's nice to ride outside again."

Carina Cassoe Kruth and Heiline's Danciera (by Furstenball x De Niro) have chosen a similar strategy to Dufour. After placing fourth in the World Cup Finals, the pair will not secure its team spot in Aachen.

Kruth is the clear number two in Denmark and pretty much assured of her spot if Danciera continues to show consistency and fitness.

The Ridehesten article does not mention Danish Olympian and team rider Nanna Skodborg Merrald, but she has disclosed to Eurodressage that Atterupgaards Orthilia is her number one choice for the race to Herning this year.  She will be riding the Oldenburg mare (by Gribaldi x Donnerschlag) both at the Danish Championships and then at the CDIO Aachen.

Nanna will also be bringing along Blue Hors Zack to the Nationals. The 18-year old stallion has not yet been competed in 2022 after Tokyo and the CDI Herning last October. The stallion has been on a lighter schedule with the younger generation taking over.

Nanna in principle had five Grand Prix horses to ride this year, but Blue Hors Zatchmo was recently sold, Don Olymbrio has not been shown since October 2021, while Blue Hors St. Schufro's last CDI was 1.5 years ago in Le Mans, October 2021.

Tack Check at the 2022 Danish Championships

The Danish Equestrian Federation (DRF) has also announced that it will be carrying out a tack check at the Danish Championships (DM) on Friday 3 June.

Horses and ponies that show lesions in the mouth or spur area will be sent home, or their riders get a warning, depending on the condition of the wounds.

"In addition to the DM classes, there may also be random checks in other classes at the event, if deemed necessary by either DRF's veterinary consultant or acting TDs. If there is a breakthrough of the skin or mucous membrane of a horse during the inspection, it will be denied start," the DRF communicated.

The Danish federation carries out more of these tack checks, all announced beforehand. At its last check, it sent 6 ponies home.