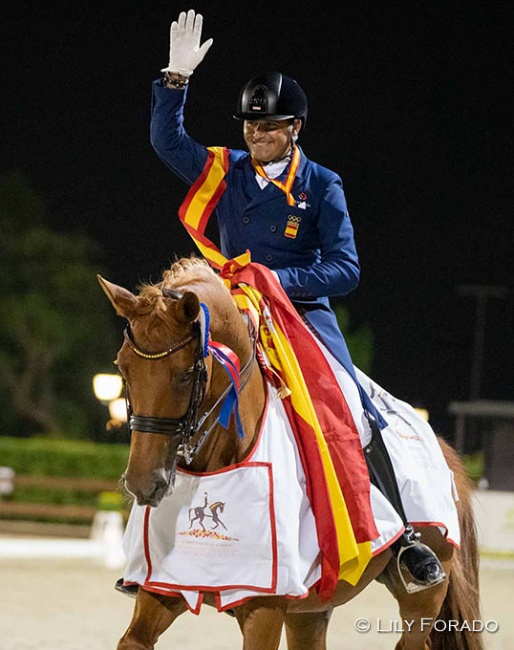 For five days spectators enjoyed the incredible performances from the best Spanish riders at the 2022 National Dressage Championships held on 1 - 5 June 2022. The Olympic venue of 1992, the Real Club de Polo de Barcelona, hosted the Spanish Championships at Grand Prix level after Oliva Nova and Madrid had organized the previous Nationals.

Throughout the Championship days, positions went up and down the leaderboard and, at the end, mistakes were paid dearly. Barcelona was the eye of the hurricane. As if it were the Hunger Games, each qualifier from the Big Tour was more electrifying than the previous one. A total of 28 riders rode onto the centerline and fought for the national title. There were many bets, but in dressage you should never take anything for granted.

The big tour was marked by a big duel between the experienced Olympians José Antonio García Mena and José Daniel Martin Dockx, with rookie Alejandro Sánchez del Barco surprising everyone and launching himself onto the podium ahead of numerous team routiniers.

On Saturday night, under the lights, Barcelona’s Polo Club was packed. The air was thick and the tension was palpable. The crowd witnessed one of the most exciting finals to date. The atmosphere was electric.

In the previous days Mena won the Grand Prix, but Dockx climbed and took the lead in the Grand Prix Special. The Freestyle was the final battle, a clash of the two Spanish titans.

Last to go on Saturday night - at the ungodly hour of four minutes past midnight -  José Antonio García Mena started his dance with ballerina Divina Royal. The Olympic rider presented his musical piece based on the soundtrack of “The Greatest Show”. The 12-year old Hanoverian bred daughter of Desperados x Royal Highness shone bright again in the extensions and in the passage. Forgetting a few glitches in the one tempi changes, the crowd was invested and erupted with roars on the last centerline, a hubbub of screams and memorable applause exploded. His final score of 77,435% put him in second place for the class, but the overall score of 223,601 became his golden final result.

In 2013 Mena  became the Champion of Spain for the first time in his career with his partner Norte Lovera. The wait was long, but nine years later Mena once again raised his career record with Divina Royal. With a big simile on his face, he enjoyed every minute on the podium. With this victory, Jose reinforced his star role on the national scene. Everyone has his share of merit, but since Saturday, the Olympic rider has every right to enjoy hoisting his Champion trophy into the Spanish sky.

“Sometimes things happen only once in a lifetime. I would have been very sad if Divina were not the champion, but fortunately it went my way," said Mena after the prize giving ceremony which took place well past midnight. "What has touched me these days is to reach a peak performance with this mare, and I feel relieved as Divina is the new gold medalist. Is the perfect and final result that completes the process of these last few months. Reaching gold in the championship is the result of her progression.  I am very happy for it and for her and now we must focus on the next challenge:  Aachen."

God is a DJ

The silver medal went to a distinguished rider. We are talking about José Daniel Martin Dockx with the 12-year old PRE stallion Malagueño LXXXIII (by Joyero XXIV x Dominante XVI) . With Spanish melodies, the Andalusian rider presented his new musical piece and surpassed all expectations producing an exquisite ride. Throughout the championship, the PRE stallion showcased superb extensions in trot, great pirouettes, but specially a very impeccable piaffe and passage tour.

The difficulty of his floorplan was sensational. The Olympic rider performed an extend canter followed by a transition into the piaffe, or some strides of walk back to a piaffe pirouette in a corner.  In other words, intense and flawless… The little tension in the trot half pass vanished with the impressive last centerline and the beautiful piaffe pirouette. The last strides brought pure delirium to the public.

As the winner of the freestyle finals with 78,155%, Dockx climbed again on the champions' podium after eight years. He got silver with 222,948 points overall.

From Expertise to a new Kid on the Block

Mena and Dockx have countless triumphs on the national and international scene, while Alejandro Sánchez del Barco made his big tour debut at this edition and did it in style.  The head rider at Yeguada de Indalo finished his first participation at a Spanish Dressage Championship with the bronze medal.

Shining in the first two rounds, Grand Prix and Grand Prix Special, in the Kur he showcased the same music he did at 2021 SICAB. The tempis and the canter pirouettes were the big highlights of the night. A slight loss of rhythm in one half passes in trot was the only 'but'. His final score of 74,450% catapulted him to fifth position in the class, but his overall score of 218,885 placed him on the third step of the podium.

The new rookie established himself at this level and more importantly, he did it with a PRE, just like Martin Dockx. The flagship stallion of Yeguada Indalo, the 11-year old Quincallo de Indalo (by Esbelto VII x Bandolero LXVII), stormed to the bronze medal in his first championships.

Aside from the three winners, the highly experienced team rider Juan Antonio Jiménez and Yeguada Las Morerias’s anchor stallion, the 13-year old Euclides MOR (by Riopele), dazzled in the Catalan arena. Very close to touching a medal again, the Andalusian rider was one of the few who did not make a mistake in the freestyle. His dance was pure poetry on the dance floor. The Lusitano Euclides MOR was 100% in harmony with his rider.  He sealed the third position in the musical test with a 75.725% and a fourth place in the final classification.

The top five closed with Borja Carrascosa with the 14-year old mare Laponia (by Stallone Quainton x Ehrenwort). The passage of his partner in crime is hypnotizing. Each stride is pure energy and elegance.

Juan Matute an Quantico (by Fighting Fit x ) grabbed the 6th position while Claudio Castilla Ruiz, who is working on his next chapter after retiring number one Alcaide, placed seventh aboard the 10-year old Hi Rico de Sobral (by Oriente). The eighth position was taken by Agustí Elias with Altaneiro BCN (by Altivo) followed by two more P.R.E. combinations: Teia Hernandez Vila on Romero de Trujillo (by Enganoso VI) and American based Pablo Gomez Molina on Ulises de Ymas (by Seni Indio).

The results of these championships - and it should be noted that from the top 10, six of them are Iberian and four P.R.E. - highlight the bright future of the breed.  The Grand Prix is a category that takes time to reach and standing out with a P.R.E makes the triumph even better on home turf.

The 2022 Spanish Grand Prix Championships also hosted a three-round finale for small tour riders in the "Criterium" category. It is not an official Spanish Small Tour Championship supported by the RFHE, as there are no medals awarded, but the riders entered this criterium class with the same poise and enthusiasm as if it were a national championship.

Former Spanish Young Rider team member Júlia Álvarez will be 22 years old in October and, therefore, is out of the YR division, now facing the seniors at small tour level. Aboard her long-time partner, the 18-year old Du Pre (by Don Frederico) she waltzed her way to gold from the first day. With averages above 71% in the PSG and Intermediate I, she brought her weekend to a highpoint on Saturday afternoon. Thirty combinations lined up and, none of them could touch her.  Álvarez danced in the freestyle and with a 75,020% she took the golden position for the third day in a row on a total score 218.197 points.

Alvarez Abad has now added another very important victory and criterium title to her trophy and rosettes cabinet with her inseparable partner Du Pre . It should be noted that Du Pre claimed this title for the second time, his first time in 2014 at Can Alzina under previous owner and trained Beatriz-Ferrer-Salat. In just three seasons, Júlia has won several national titles: 2020 Spanish Young Riders Champion, Silver Medal in the 2020 Small Tour, Silver Medal as a Young Riders in 2021. In addition to her European Championships participation in 2020 and 2021, they are a clear example of how valuable her training with Beatriz has been.

"Winning the Small Tour finale has been an incredible experience for me, especially because I competed against the best riders in Spain, those riders I admire and respect," said Julia. "I think this is the fruit of the work we do at Villa Equus, the result of desire and enthusiasm that Bea passes on us every day, in every training session. The proof is that the entire team there has obtained excellent results this season. I'm still on cloud none. It's been so special."

Beatriz has played a fundamental role in Júlia's development as a rider, both in training and growth in sport. Their paths crossed in 2017 and since then they have created an unbreakable symbiosis and relation of coach/student.

From Student to Teacher

Beatriz Ferrer-Salat became the runner-up in this finale with 213.870 overall points. Aboard the 12-year old KWPN mare First Lady (by San Remo) she fought tooth and nail to stay in the top 3. She sealed a second position in the PSG and Intermediate I, but dropped three positions in the freestyle with 72,370%. However the total percentage points made her rank second behind student Julia.

With just a few tenths of a difference, Juan Antonio Jiménez was third with the 12-year old mare Lanya El Coso (by Lord Loxley). Throughout the contest, the Madrid based Jimenez was third in the first two rounds and rose to the second place in the Freestyle thanks to a remarkable 73.315%.

With full stands, the small tour freestyle was the first highlight of Saturday night at the 2022 Championships. The performances of Lucia Gallardo and Jordi Domingo must be noted. A student of Bernadette Pujals, Lucia Gallardo climbed several positions on the 10-year old KWPN gelding Hip by Johnson (by Johnson) and in the finale reached third place with a 72.890%. Likewise, Jordi Domingo riding the 8-year old KWPN bred Jumeaux (by De Niro) was one of the riders who presented one of the most striking musical pieces with happier/pop tunes. His final score was 72,370%, which placed him in the top 5.