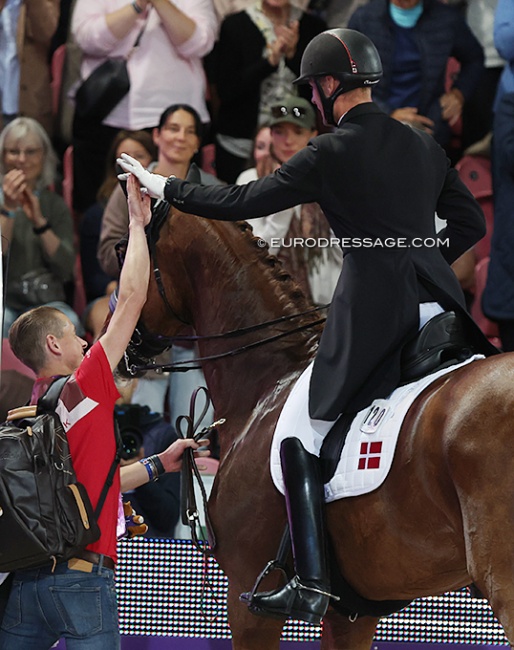 The Organising Committee of the 2022 FEI World Championships in Herning (DEN) have not only provided athletes with top class competition conditions, but have also set a new benchmark for the care and recognition of Grooms at equestrian Events.

With a dedicated Groom’s Lounge at the stable area, to in-venue recognition for Grooms on the big screen, the Organising Committee have ensured that this stakeholder group were well integrated into all organisational aspects of the World Championships.

“We have been very impressed with the level and attention that the Grooms have received during the FEI World Championships in Herning,” Founding Director of the International Grooms Association™ (IGA) Lucy Katan said.

“The #ChampionsAsOne concept has resonated strongly throughout the Event and we are extremely pleased to see that Grooms, who have been the unsung heroes of the equestrian world in the past, are now being formally recognised and appreciated for all their hard work behind-the-scenes.

“While the Organisers have proactively introduced key initiatives to provide comfortable working conditions for Grooms, they have also been open and willing to listen to the IGA’s ideas and suggestions.

“As an ‘IGA Show Supporter’, the Organising Committee have worked closely with us to implement feedback from Grooms received through an international survey we carried out earlier this year. A key point that came through strongly was to have a ‘grab-and-go’ style take away option for late night food provisions that would be of use to Grooms on the really busy and long days. The IGA fed this back to Herning 2022 and we were delighted when we learned that this service was made available for the Grooms at the Championships.”

In a move away from tradition, the FEI World Championships in Herning also saw Grooms feature in the prize giving ceremonies for the first time ever. Every Groom was mentioned by name and formally included in the gift giving protocol during the ceremony.

“Grooms are an integral part of the equestrian family and as any athlete knows, behind every happy horse is a happy Groom!” Herning 2022 CEO of Sport Jens Traberg said.  “We wanted to ensure that Grooms are looked after, not just in terms of food and beverages but that their work and their important place in the equestrian community is also recognised.”

The significance of the inclusion of Grooms in key celebratory moments was not lost on the community.

“It was an emotional moment to see members of the Grooms community finally get recognised for the work that they do behind-the-scenes,” IGA representative in Herning Jenny Ellis said.

“The FEI World Championships in Herning have certainly set the bar high and we hope that others will continue to build on what has been done here in Denmark for the Grooms community, and will share these best practices with other Organising Committees in the future.”

An independent not-for-profit professional association, the IGA was established to achieve greater representation and career recognition for grooms, as well as to improve their working conditions, especially at equestrian events where long hours are the norm.

The IGA was formally recognised by the International Equestrian Federation (FEI) with the signing of a Memorandum of Understanding (MOU) at the FEI Sports Forum held in Lausanne (SUI) in April 2022.