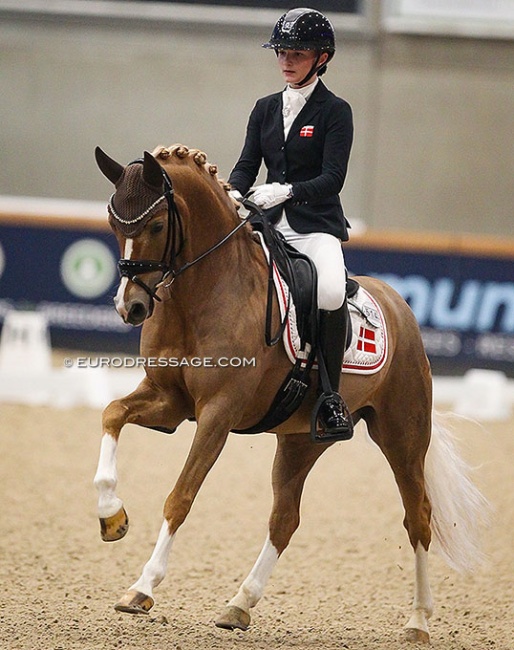 Bred in Germany at Kastanienhof, he was licensed at the 2016 Alsfeld pony stallion licensing and achieved his HLP requirements through sport by scoring 7.6 at the Bundeschampionate qualifier in Bremen in May 2019. No offspring are registered with the German equestrian federation. He got gelded as a 3-year old to be focused on sport.

Owned by Silke Riecke-Honermeier, the chestnut was first competed by Kim Charlotte Riecke in the riding pony tests in 2018 when Crimson Gold was four.

In 2019 young pony professional Antonia Busch-Kuffner took over and competed him at several regional shows in north Germany. At the 2019 Bundeschampionate in Warendorf the pair was 9th in the 5-year old Dressage Pony Finals.

In 2020 Emily Honermeier competed him briefly, as well as Joschua Dietze, but Honermeier rode him at the 2020 Bundeschampionate and placed fifth.

Nielsen and Crimson Gold made their international show debut at the 2022 CDI Opglabbeek and went on to compete in Troisdorf, where they won all three tests, followed by the Danish team qualifier at the CDIO-P Hagen.  At the 2022 European Pony Championships in Poland, the pair won team bronze and finished fourth in the individual test and tenth in the freestyle.

Crimson Gold has now been sold to the Hessian based 12-year old pony rider Jil Kögler, who trains with Semmieke Rothenberger.

The 16-year old Nielsen is a seasoned pony competitor. Crimson Gold is already the fourth pony she has competed internationally, starting with Dot Com (sold to Jan Brink) which took her to the 2020 Pony Europeans, followed by Timms My Fritz, and Strandgaards Doleys. This was her last year on ponies.