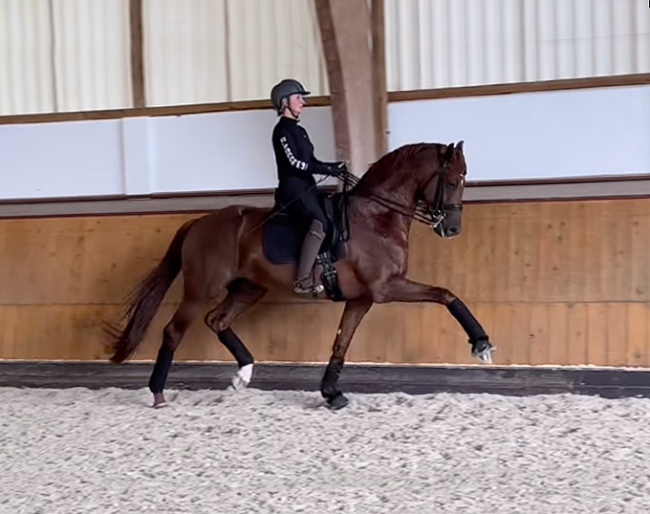 Australian Olympian Kristy Oatley has added new horse power to her collection. She has received the ride on the 9-year old KWPN bred stallion Furst Jazz.

Furst Jazz is by Furst Romancier out of Borendy (by Painted Black x Jazz). The chestnut is bred by Pegasus Stables in The Netherlands and owned by Paul Schockemohle and Joop Van Uytert.

The chestnut was originally named Inverness P, but received a German name when he was refused for breeding by the KWPN society but licensed in Germany with the Westfalian, Oldenburg and Hanoverian studbook.

In September 2017 Furst Jazz was put in training with Diederik van Silfhout, who competed the stallion in the 2018 KWPN Stallion Competition.

In the spring of 2020 Dinja van Liere took over the ride briefly, but that partnership ended when she accepted the job of head rider at Reesink Horses.

In the autumn of 2020 Furst Jazz moved to former Dutch team rider Danielle Heijkoop, who was pregnant at the time. He spent the majority of 2021 without training back at Van Uytert, where he needed to fulfil his stud duties. He only returned to Danielle at the end of the 2021 breeding season and the duo made its national show debut at ZZ-licht level in October 2021 and at small tour level in December 2021. They competed in five tests that winter.

In the summer of 2022, Schockemöhle and Van Uytert agreed to move Furst Jazz to Kristy Oatley's stable near Hamburg, Germany.  The Australian did not buy the horse, but has been asked to produce him to FEI level.

"He is out of this world. I don’t know many horses with his talent," Oatley told Eurodressage, adding that the chestnut is an "amazing horse," but "very green."

The pair made its show debut on Thursday 29 September at the regional show in Bad Bevensen in an S* test.

Huan sold as a foal in auction in Asten (NED) in 2012 for 2,100 euro. He was presented at the 2015 KWPN Stallion Licensing but not accepted. Later that year he was competed by Martijn Heilig in The Netherlands. He sold to Oatley in 2018 and was first shown by Stefanie Hilger in 2019, before Kristy began lightly competing him in 2020.

"I've had for four years, he has only done a handful of shows," Kristy told Eurodressage, admitting that it's hard to juggle her own competition career with that of her daughter Rose Oatley, the 2021 European Pony Championship and current German junior team rider. "It’s hard getting the horses out for experience when I like to devote a lot of my time to Rose."