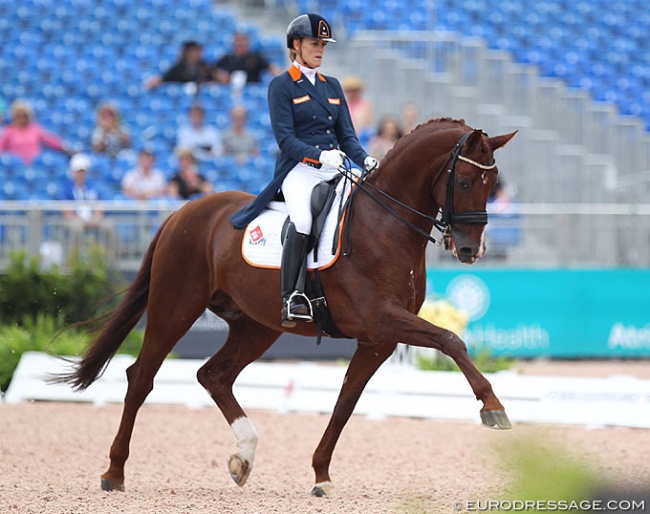 Madeline Witte-Vrees' number one Grand Prix horse Cennin has been sold to Australia. He will continue his sport career down under with young rider Jessica Dertell.

Cennin is a 15-year old Dutch warmblood stallion by Vivaldi out of Vitana V (by Donnerhall x Hemmingway). He is bred by Jacqueline Cuppen, who had bought the dam in foal to Vivaldi from Peter Verdellen. Cennin was owned by the breeder in partnership with Nico Witte.

The 2007 born Dutch bred stallion was licensed for breeding with the Oldenburg society in 2010.  Half a year earlier he was presented at the 2010 KWPN stallion licensing and placed fifth in the premium ring but he never did his performance test in Holland and was therefore not allowed to breed for KWPN.

Cennin went on to do his 30-day stallion performance test in Neustadt/Dosse in the autumn of 2010 and scored 8.29 for dressage and 6.99 for show jumping, finishing on a total of 7.84 points. He initially stood at stud at Ludwig Kathmann's, where he was bred to around 100 mares.

Only in 2017 the KWPN society approved Cennin for Dutch warmblood breeding based on his results in sport. Cennin's most successful offspring is Coco Island (Fie Skarsoe), Chuck Bass (Kira Ripphoff), and Cinnamon M (Daniel Spindler).

Cennin's sport career started in Germany in 2011 when the liver chestnut was 4-years old. He was first competed by Friederike Reins in the riding horse tests.

Cuppen pulled Cennin away from Peters when she split from her then partner Xavier Schulkens. The stallion was sent to Madeleine Witte-Vrees' yard.

Under Madeleine Witte-Vrees the liver chestnut stallion made his international show debut at small tour level in 2014 at CDI Munich Indoor, where he won the Prix St Georges with 70.737%.

In 2017 they represented The Netherlands at the World Cup Finals in Omaha, where they were fifth in the Kur to Music. At the 2017 European Dressage Championships in Gothenburg, they were 8th in the freestyle.

In 2018 they returned to the World Cup Finals in Paris and landed 6th place and went to the World Equestrian Games in Tryon, where they were 22nd in the Grand Prix Special.

In the winter of 2018-2019 he competed in the World Cup qualifiers in Stuttgart, Mechelen and Amsterdam as well as the CDI 3* in 's Hertogenbosch, but then got sidelined because of an injury for almost 1.5 year. He returned to the arena in October 2020 at the CDI Oldenburg and half a year later did his last CDI in May 2021 in Grote Brogel, where he posted 70.391% in the Grand Prix to finish 9th.

Cennin has now been sold to Brett and Samantha Thomas of Sabble Farm as a Young riders horse for the coming 17-year old Jessica Dertell.

Dertell made her international show debut in June 2018 as a junior rider aboard Valerius Waltermeyer (by Highhaven Park Welt's Emperor). In 2020 she premiered at young riders level aboard Eskara de Jeu (by  Jazz x Jetset D), and continued to ride at junior level with Gladstone MH (by Bordeaux x Montecristo.

"Sometimes decisions are hard but knowing that you'll be competing with a youth rider a level low er in sunny Australia makes it a lot easier," Madeleine Witte-Vrees said about the sale of Cennin.