Melissa Galloway, New Zealand's Strongest Ticket to the 2021 Olympics, Aims to Move to the U.K. 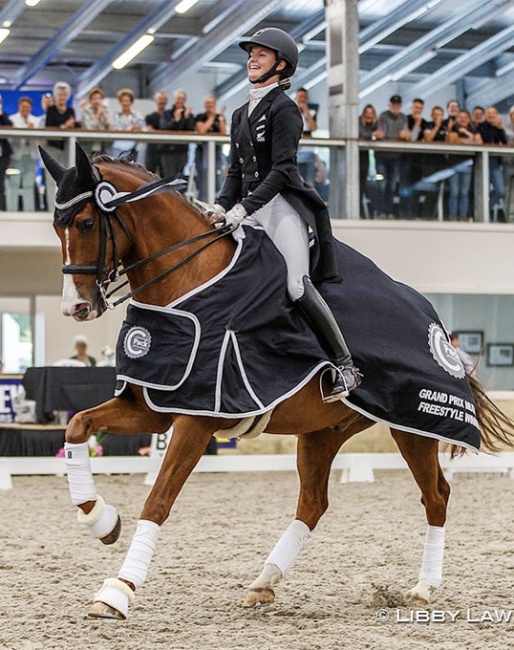 This story was originally published in Newsroom.co.nz and is republished with permission.

Melissa Galloway would go to great lengths to reach her Olympic dressage goals; making the move to the United Kingdom in the midst of a global pandemic is one of them.

The 27-year-old is aiming to ride at the postponed Tokyo Olympics next year, but will have to jump a number of hurdles to get there.

Move to the U.K. in Preparation of Tokyo

Galloway, New Zealand’s leading dressage rider, says it’s a huge decision to move to the Northern Hemisphere in February as a new strain of Covid-19 spreads through England.

“But it’s either go all guns blazing and move over there, or just sadly give up the dream until Paris [2024 Olympics],” she says.

“Which is what I could do, but at the same time, because we're working with animals, you just don’t know how long they're going to last. And anything can happen in the next four years.”

To qualify for next year’s Olympics, Galloway needs to place well at certain international shows. The events are not available in New Zealand - and Australia is no longer holding any (CDI's) because of Covid-19.

Right now, Galloway and her main horse, Windermere J'Obei W, are “going amazing” and she wants to build on that.

The pair kicked off the season in March by winning Horse of the Year after turning heads across the Tasman in February at Willinga Park on the south coast of New South Wales.

It was there she finished a very close second to Australian Olympian Mary Hanna at the Dressage by the Sea event. But it was worthy of praise, given it was Galloway’s first international event with her own horse. They only featured in their first grand prix together late last year.

They carried on their fine form in mid-March, winning the CDI FEI grand prix in Hastings. Galloway also placed third at the same event on her second grand prix horse, Windermere Johanson W.

Last month, Galloway and J'Obei W won the National dressage championships - finishing ahead of Rio Olympian Julie Brougham and Vom Feinsten, back on the main stage after a year of chemotherapy and surgery for abdominal cancer.

Galloway's results are reassuring in her bid to make the Tokyo Olympics. She's looking to fly to the UK in the first week of February.

“We’re making plans but if it's looking really bad over there with Covid and lockdown and things, we’ll just have to pull the pin,” she says.

No surprises Galloway is willing to put her team in the best position to be competitive. She’s known for following her instincts and bucking norms.

She started training her own horses from a young age. And now J’Obei W and Johanson W are competing at grand prix level - the highest competition stage in dressage.

Galloway left school at 17 to train in a barn in the North Island before moving back home to work on the family stable, Windermere, in Tuamarina - a small settlement in Marlborough, where the population is just under 250.

At 18, Galloway moved to Germany to train horses and broaden her riding experience with Hubertus Hufendiek, the renowned dressage rider, coach and trainer. She met him while he was living in New Zealand.

She was only meant to go for two weeks but ended up staying for a year, and on her return to New Zealand she wanted to start anew. Galloway sold her horse and started looking for a younger option.

“I actually rode a horse in Germany by a stallion called Johnson and when I came back to New Zealand, there were these two very young horses,” she says. “One was only a year-and-a-half old and the other was three-and-a-half years old and they were both by that same stallion, so they really caught my eye.”

At first there was push back in selling the pair to Galloway as the horses had a reputation for being quite difficult and she was young and unproven. But after hearing she had ridden the stallion in Germany, she was able to visit the owners “and the rest is history”. J’Obei W and Johanson W have been with her ever since.

Johanson W, the elder of the two, had gone to three different breakers before she purchased them because he was so difficult. “He was a handful. He bucked me I think six times in the first six months I had him. And he bucked me off in my first competition with him,” recalls Galloway.

“And still to this day, there's a little bit of that in there but he's a lot better. I think the higher level he got with his dressage, the better he became which is really cool.”

Why did she persevere as a young rider?

“I just have that real determination and I always believed in him. When I first fell off I was so upset,” she says. “I wanted to be the first person that hadn’t fallen off him because I knew everyone had.

“As much as he is a bit of a pain, I always believed he had the talent and he does. I just needed to keep persevering to bring it out, really. His younger brother, my best horse now, was a lot easier.”

Training Youngsters Up the Levels

Galloway has always wanted to train her own horses, even more so knowing the obstacles of living in New Zealand - cost and availability.

“To be honest, I’ve always been like that from a young age. When I got my first horse, everyone suggested ‘Oh you should get a schoolmaster [a safe experienced horse] or something because they know what to do’. But I never wanted that,” she says.

“I was like a 15-year-old girl with a five-year-old horse, which is not what most people would recommend, but it taught me to ride and train. I’m pretty young for someone that’s actually taught two horses now at grand prix level who are doing really well. I’m pretty proud of that.”

Galloway says she didn’t want anyone to question her ability based on potentially buying top-notch horses.

“Even when you do spend a lot of money, you still have to be able to ride the horse which takes a lot of skill,” she says. “But I think you feel a lot more accomplished if you’ve done it yourself.”

Riding at Willinga Park before lockdown, a few international judges from America and Germany noticed the synergy between horse and rider.

“They said there's a real difference with my horse, there was something about us that they knew we had been together for years. And I thought that was really cool,” Galloway says.

That was a highlight of her career so far. “Even though I have won other cool things, going to Australia with your own horse and the whole journey of it all…we went over as the underdogs, there were a lot of other top riders from New Zealand going and nobody expected me to be the one that came out on top. So that was pretty cool,” she says.

The awards they have reaped have been steadily improving. In 2016, J'Obei W was crowned North Island’s young horse dressage champion, and by 2018 they'd won the New Zealand U25 grand prix championship and came out on top of the Prix Saint Georges class at the FEI world dressage challenge.

She got into dressage through her mother’s love of horses. While Galloway’s dad was really sporty, he had no involvement with the animals. “My dad actually went to the world wakeboarding championships, like, many years ago. So we kind of grew up with all sorts of sports - wakeboarding, snowboarding, mountain biking and all sorts of stuff,” says Galloway, who recently ran a half marathon.

“My sister and I used to sit out by the kitchen and beg mum to let us ride her horse. And eventually we got a little Shetland pony we had to share. We went through pony club and that whole thing." Her younger sister now competes in showjumping.

Career in Dressage, Believe in Yourself

Galloway, who describes dressage as “dancing with horses”, had been a dancer when she was younger and thought that may where her career lay.

“Dressage is pretty much the perfect combination of the two. And I love the challenge of it. No one has ever got 100 percent in dressage, so everything can always be better,” she says.

“The feeling you get when you’re in complete harmony with your horse is really indescribable – and trying to reach that feeling all the time is what keeps me driven.”

Her advice to those wanting to follow a similar path: Believe in yourself.

“That’s really taken me a long way. In any sport, there are always people who have opinions, there's different coaching, people of influence that tell you different things,” she says.

“I’ve always stuck to my guns, and stuck to what I really believed in with my training, and what I wanted to do. That goes with anything really, so try to believe in yourself and your system. The way you want to do things. Anything is possible, just go for it.”