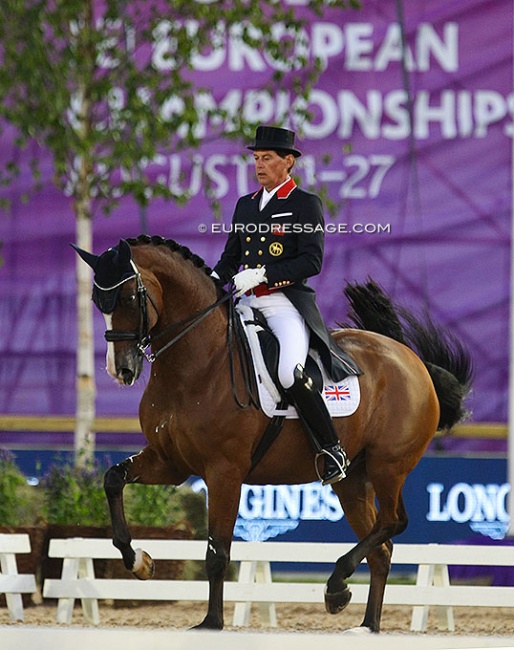 Lollipop, Great Britain's team horse at the 2017 European Championships in Gothenburg, has found a new owner and rider in the U.K.. He will continue his sport career under Leah Beckett.

Lollipop is an 18-year old Hanoverian gelding by Lord Sinclair out of Batida (by Welt Hit I x Banditentraum x Inschallah AA). He is bred by Paul Schockemöhle.

Lollipop was produced to Grand Prix level at Hof Kasselmann in Hagen.

He was first competed as a 4-year old by Johanna Klippert in 2008. A year later Christop Koschel took over the rode and competed him up to M-level in 2010.

Lollipop then disappeared from the German show scene to resurface in 2015 at Grand Prix level under Kasselmann's principal rider at the time, Steffen Frahm. The gelding had changed ownership to Russian Elena Knyaginicheva.

Frahm made his debut in Ankum in November 2015. Their international show debut, and the horse's first CDI, was in Samorin in May 2016, where they finished fourth in the Grand Prix and second in the Special.

By the end of 2016 Frahm had left Hof Kasselmann and Bianca Kasselmann took over the ride briefly during the winter.

In the spring of 2017 British Olympian Emile Faurie began competing Lollipop at CDI's and rode the horse to its biggest successes that year. They won the 2017 Hamburg Dressage Derby, competed in Fritzens and at the CDIO Aachen before representing Great Britain at the 2017 European Dressage Championships in Gothenburg, where they were fourth with the team and 20th in the Grand Prix Special.

In the winter of 2017-2018, Faurie rode Lollipop in the World Cup qualifiers in Lyon, Gothenburg, and 's Hertogenbosch.

Owner Knyaginicheva then decided to sell Lollipop and had him shipped to Helgstrand Dressage. The horse did not sell but ended up in Helgstrand's own ownership for Andreas' wife Marianne to ride.

Marianne and Lollipop rode their first CDI in Herning in March 2019 and went on to show in Uggerhalne, Aarhus, and Randbol. That year they finished 8th at the 2019 Danish Dressage Championships. Marianne's last internationals on Lollipop were in Lillestrom and Herning.

Sold and Moved to the U.K.

Lollipop moved to the U.K. later on in 2021 with Australian-Danish Anya Brunander as new owner.

The ride on the experienced Grand Prix horse has been allocated to Leah Beckett, who will make her national show debut this weekend at the premier league national show at Vale View.

The 40-year old Beckett has competed three horses internationally so far. She debuted in 2017 at CDI Keysoe on Russki (by Rimskij Korsakov x Dream of Heidelberg) and competed Nirvana Celestial (aka Sundorfs Dumbledore, by Don Romantic x Leandro) as well that year. In 2019 she represented the U.K. at the World Young Horse Championships on the then 7-year old Merlot Royal (by Millennium x Rubin Royal).