An Afternoon at the 2022 CPEDI Mannheim 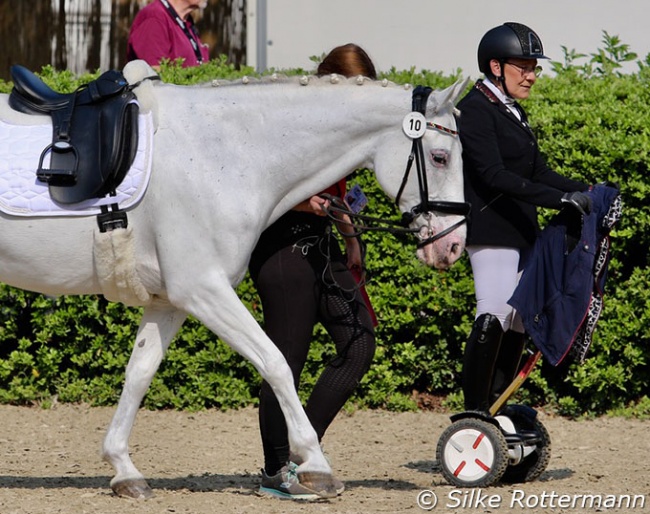 Mannheim is the closest international show to my home which I have attended ever since my parents were happy to drop me and my sister off at the show-grounds as young teenagers. While they visited the nearby outdoor fair, we lived our hearts out watching the horses.

When I was still attending school, I was always annoyed the Grand Prix Special took place on a work day. Now, some 25 years later and working in education myself, I encountered the same problem: The CPEDI was held entirely on workdays this year, from 2 till 5 May 2022. The only day possible working for me was Wednesday afternoon and after a morning at work, I hopped into my car at 1 pm, dropped my dog at a mate and headed to Mannheim for an afternoon of para dressage.  While it made me somehow discontent that I couldn’t see all division, it still seemed better than missing Mannheim completely this year.

When I departed in my home-town the black sky opened and a short thunderstorm came down with heavy rain, but passing Heidelberg the sun was back at full force, raising the temperatures to over 20 degrees.

Unlike on usual weekend show days the stream of visitors to the "Mannheim Maimarkt" fair was comparatively small and I got quickly to the press parking and was accredited in no time.

Grade III had just finished and I took some photos of the Grade I and II horses preparing for their classes in about an hour time. I phoned with Canadian Roberta Sheffield with who I had arranged an interview 10 days earlier in Waregem. Roberta appeared fast and we sat down in glistering sunshine recording our conversation (on which you will read later) and taking some photos of her and her mare Fairuza near the stables.

With Impulsion to Grade I

Meanwhile Grade I in the stadium was in full swing. The Mannheim stadium is big with two big grandstands on the long side and countless flags of the participating countries, having already hosted two European Championships in jumping.

The sun was still shining and German Martina Benzinger warmed up Nautika for their turn. The gleaming white Lipizzan with the pink nose defied the saying that walk is a gait "without impulsion"  and let me think of the French definition for „impulsion“ which seems so fitting to those Grade I horses. To the French impulsion is the horse’s "inner attitude to react to the slightest indication of the rider."

For most of the able bodied riders Grade 1 might be not very attractive looking or even boring, but to train a horse to maintain the quality and diligence of the walk is an art in itself. Austria’s ever-smiling Julia Sciancalepore returned from the stadium, praising her Hanoverian Heinrich aka "Heini," who is now tacked in the double-bridle instead of a snaffle, while trainer Sarah Wahl gently patted the cool gelding’s forehead. Riders like Julia and her likewise happy-go-lucky equine partner are a blessing to para dressage and will certainly raise its popularity with their refreshing manner.

When Grade I came to a close, the sun disappeared and clouds built up behind the stadium. It remained dry while the first Grade II riders warmed up their horses, mainly after their trainers had already loosened them up which is allowed to a certain time limit. Having narrowly missed out an individual medal in Tokyo, Heidemarie Dresing from Germany looked more determined than ever to even improve her appearances from 2021 with her top horse La Boum. At the same time her strongest rival in Mannheim, the 2012 London Paralympic champion and former Olympic eventer Pepo Puch, quietly warmed up his Tokyo medalist Sailor’s Blue (by Swarovski x Arogno). It was the refined gelding’s first outing since Tokyo.

First to go into the stadium for Grade II was German Gianna Regenbrecht and her new ride, the impressive 12-year-old Oldenburger stallion Fürst Sinclair (by Fürstenball) which she took over from Elke Philipp, who won individual bronze with him in Tryon 2018. Stallions are rather an exception in Para dressage. The weather turned from just a dark sky into stronger wind. The almost empty stadium was filled with countless flags flapping loudly in the wind and one could easily sense the tension under which the German pair had to perform. However the massive stallion who knows such stadiums from his previous championship appearances remained surprisingly obedient. Gianna probably would’ve risked a bit more in friendlier weather, but still rode bravely forwards. Her strongly focused face resolved in a relieved big smile during the final immobile and very good halt. Fürst Sinclair was a really good boy!

The wind didn’t cease and thunder from far away could be heard when La Boum entered centre stage, led in by German national coach Bernhard Fliegl. This impressive Hanoverian gelding has a lot of natural impulsion and a big striding trot. Given the noise from the flags and the general atmosphere caused by the weather one could almost sense him getting tense, even though Heidemarie Dresing held it together. Unfortunately the tension level became too much and in front of the judges at the short side La Boum spooked? Dresing is certainly very strong minded and instead of retiring, she held on and once the chestnut was under control again, sent him forward in the trot across the diagonal. Talk about courageous and brave riding! My admiration couldn’t be bigger for that strong willed lady on that day in Mannheim.

The German still scored over 70% when Puch started his program. Also Sailor’s Blue remained obedient, even though understandably the black gelding might have felt not too relaxed inside. His usual nice frame and contact never wavered and Pepo Puch won a blink of an eye ahead of Dresing.

Finally the heavens opened and it rained cats and dogs. I felt for the young Irish Gráinne Hallahan who had to bear the wet element, even though she and her grey Irish sport horse gelding Jazzland should be used to it on the green island where they come from.

Once the classes were over, the rain ceased to a slight dropping and the prize giving was able to take place in front of Mannheim’s impressive judges’ tower as dictated by tradition. Winners and place-getters in all five classes were honoured and I asked myself who of them might make it to Herning and if we will even see some in the same spot then.

For the para riders Mannheim was a good place as usual, offering the possibility to ride in a stadium of championships level and even though the crowds were overseeable, the atmosphere with the high grandstands and the sometimes noisy background from the nearby fair were a good test for horses and riders alike.

While the German para riders have their next trial at the German Championships in Munich at the end of May, the international para riders in Mannheim have  numerous CPEDI ahead to contest and prepare themselves for the big goal this season in Denmark.

In the early evening I wandered back from the show grounds to my car nearby, with the evening sun timidly appearied again. Even though it had been a short visit this year, I did not regret one minute spent in the little universe that is para dressage. It makes one realizes that courageous riding doesn’t always mean jumping CCI 5* fences in Badminton, but to push one's abilities to the limits and sometimes even beyond.

Related Links
Scores: 2022 CPEDI Mannheim
Para Dressage at its Finest at 2022 CPEDI 3* Waregem
Photo Report: Witnessing Good Sport and Equitation at the 2021 CPEDI Mannheim
Verity Smith, Competing as a Blind Dressage Rider in a World of Vision
Hanne Brenner on the Evolution of Para Dressage the Past Two Decades
Sophie Wells: Ability Counts