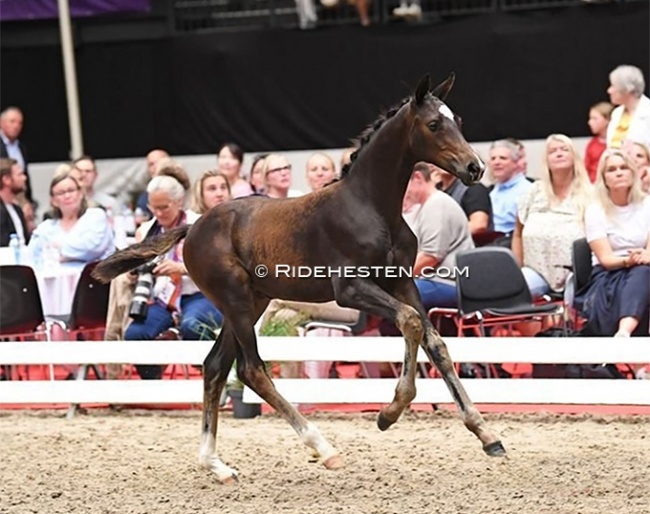 Gravity became the price highlight of the 2022 Danish warmblood elite foal auction which was held in the Jyske Bank Boxen indoor arena at the 2022 World Championships in Herning on 9 August 2022.

Instead of hosting the auction at the national equestrian centre in Vilhemsborg like usual, the Danish warmblood society moved the elite foal and mare show, as well as the  auction to Herning to benefit from the traffic at the championships. The move, however, was hardly made public and no press releases were sent to the media to notify the general public of the changed circumstance.

The society, however, was able to reach out to its fixed network of clients as regular customers showed up in Herning and dug deep into their pockets for Danish bred foals.

"Because the World Championships were so amazing and so moving, I felt compelled to grab the chance to have my very own Glamourdale," Franks took to Facebook. "There were 2 Glam's in the Danish Warmblood auction. Since both were fantastic, both Glamourdale fillies are coming home with me."

Franks travelled to Herning together with her friend, Canadian Grand Prix rider Vicky Lavoie, who has already purchased numerous foals in Denmark in the past few years, but this year focused her shopping on the German market. However, in Herning, she was convinced to buy Strauss (by So Perfect x Tailormade Temptation) for 36,000 euro and Gammel Mølles Five Weeks (by Highfive Fuglsang x Blue Hors Leredo) for 18,000 euro.

Lavoie, who owns the bio-energy company Nexolia in Quebec, also bought Henri the mascot for 3,000 euro for the tree planting project near Herning.

The most expensive jumping colt sold to Frandsbjerg Horses, who each year by the Danish Warmblood Jumper foal champion. This year they paid 32,000 euro for Lerskovs Dialon (by Diablue PS x Colman).