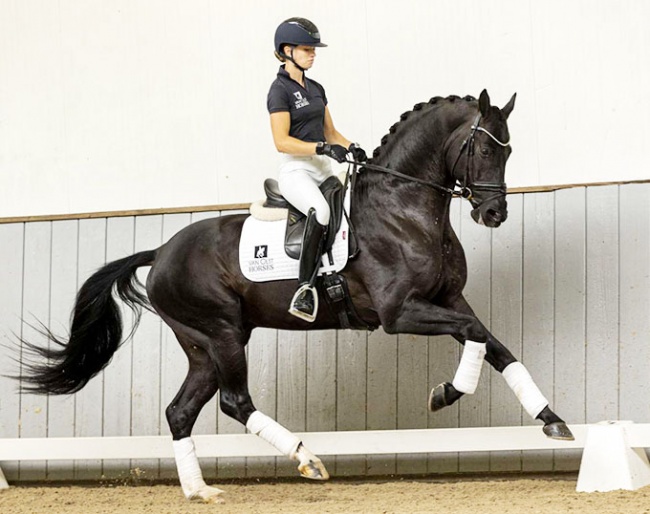 The 4-year old licensed stallion Guinness became the best seller of the 2021 Van Olst Sales of ridden horses of which the online bidding concluded on 1 November 2021.

Both horses were acquired by Marc Geerts' jumper brood farm Tommelberg in Loenhout, who have decided to widen their scope and include dressage in their programme. Both horses will initially stay in training at Van Olst in The Netherlands.

The second most expensive horse was the 3-year old KWPN mare Noire NA (by Painted Black x Lord Leatherdale), which sold for 90,000 euro to the U.K..

A German customer held the highest bid of 60,000 euro for the 4-year old stallion Depay (by Don Joe x Hohenstein) but that did not meet the reserve set by Van Olst and the horse didn't sell.

The oldest horse in the collection, the 7-year old small tour level trained Jack (by Negro x Flemmingh), stays in Holland for 65,000 euro.

The 4-year old ster mare Mabel (by Dettori x Lord Leatherdale) sold for 35,500 euro to the U.K. She will be joined by 3-year old gelding Njaib (by Four Legends KS x Lord Leatherdake) for 24,000 euro.

Dutch buyers invested the most at the Van Olst auction.